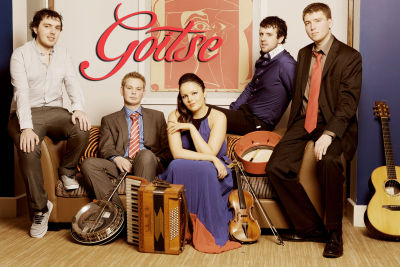 Goitse takes Trad Group of the Year at the Live Ireland Awards!

Goitse has established itself as a massively popular band among trad fans the world over. Rightly so. This wonderful quintet released Tall Tales & Misadventures to worldwide recognition in 2015.

They also recently won Group of the Year with the Chicago Irish American News.

Forged in the white-hot creative crucible of Limerick University’s Irish World Academy of Music and Dance, Goitse have graduated with a musical maturity worthy of the greatest. They have made a name for themselves as one of the most sought after bands amongst connoisseurs of Irish Traditional music cross the globe, with their performances gaining notoriety across four continents. Having won feverish critical plaudits for their Dónal Lunny-produced second album Transformed, the band has skyrocketed to the forefront of the traditional Irish music scene.

Their distinctive sound lies in the quality of their own compositions interspersed with traditional tunes from Ireland and abroad, which make each set entertaining and unique. Laying the foundations for the music are World and All-Ireland bodhrán champion Colm Phelan and Conal O’Kane, who is fast making a name for himself as one of the finest guitarists of this generation. The gripping rhythm section sets a breaktaking pace for the music while the sweet, charismatic voice of Áine Mc Geeney draws audiences into the music in a way very few performers can achieve. When not singing, Áine’s energetic style of fiddle playing is complimented hugely by multi-award-winning banjo and mandolin virtuoso James Harvey. His ability to transcend genres, combined with his unparalleled technical ability is a joy to behold. Bridging the gap between melody and accompaniment is the piano and piano accordionist, Tadhg Ó Meachair. The Dublin native is renowned for his unique approach to bass work and accompaniment, while also having picked up national awards for his melody playing. Lace up your dancing shoes and get ready for a night of wonderful music and fast paced fun with Goitse.