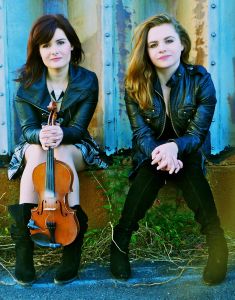 Appearing on stages across Canada, the United States, France, Germany, Bermuda and the UK, the list continues to grow as people are beginning to know the names Cassie and Maggie MacDonald. Since their first festival performance at the Goderich Celtic Roots Festival in Ontario, the girls have gone on to be soloists in the Royal Nova Scotia International Tattoo and International Polizi Show in Hamburg, Germany, perform for the French Ambassador in Paris, France, play at the independence day celebrations on Bermuda Island, the Milwaukee Irish festival, the Celtic Colours International festival, the Lunenburg Folk Harbour festival, Celtic Classic festival, Stan Rogers International Songwriters festival, Festival Memoires et Racines in Jolliette, QC to name a few. This year will prove to be the busiest and most exciting yet with the release of “Sterling Road” their second studio album, a European tour, and appearances at numerous festivals and concerts throughout North America.