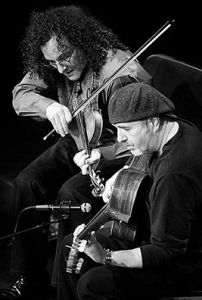 “The remarkable duo has honed a ravishing repertoire by distilling the melodic essence of traditional Irish tunes. Hayes and Cahill have distinguished themselves by bringing chamber music’s intensity and dynamic control to folk tunes.” - Seattle Times

Martin Hayes is regarded as one of the most extraordinary talents to emerge in the world of Irish traditional music. His unique sound, his mastery of his chosen instrument – the violin – his acknowledgement of the past and his shaping of the future of the music, combine to create an astonishing and formidable artistic intelligence.

Dennis Cahill is a master guitarist, a native of Chicago born to parents from the Dingle Peninsula in County Kerry, Ireland. He studied at the city’s prestigious Music College before becoming an active member of the local music scene. Cahill’s spare, essential accompaniment to Martin Hayes’ fiddle is acknowledged as a major breakthrough for guitar in the Irish tradition.

Martin Hayes and Dennis Cahill met in Chicago in the 1980s. They formed the jazz/rock/fusion band, Midnight Court, which allowed them to experiment with a variety of new music styles. When Martin reclaimed his traditional roots, reinvigorated, and after recording two solo albums, he began a new musical relationship with Cahill, beginning with the lyrical music of East Clare. They played long, sometimes thirty-minute, multi-tune sets in their concerts, starting from the simplest of melodies, building in intensity, but never abandoning musicality and ideas.