with The Rakish Angles
Concert poster 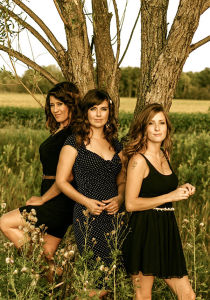 Western Canadian Music Award Winners, Sweet Alibi, have been captivating audiences across Canada for the past few years. The Winnipeg-based folk/pop trio infuse their signature harmonies with influences of everything from folk to country to soul, without a hint of shame. Sweet Alibi's Jess Rae Ayre, Amber Nielsen, and Michelle Anderson share personal experiences that are genuinely felt in song, and in no time, will have you dancing and singing along.

Tom Power of CBC Radio 2 describes the band as simply as this: "If Mumford and Sons and the Supremes had a love child you would name it Sweet Alibi". The band, currently touring new material from their CFMA/WCMA nominated release We’ve Got To (produced by Rusty Matyas of Imaginary Cities), grabs your heart and doesn't let go!

As word of the band spreads, the emotional connection is the characteristic that comes through the loudest. They themselves will tell you their raison d'ètre isn't necessarily about unfolding the corners of musical innovation until the wheels come off, although they dabble in that regard. They are capable of finding new latitude, but it isn't that, their technical proficiency or their well-chosen lyrics - it's much more basic and raw than that. They bypass the intellectual filters and spark something in the emotional centre of the brain, and they're doing what they're supposed to do.