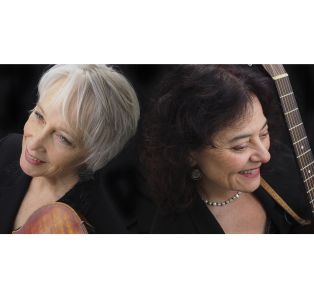 Laurie Lewis and Kathy Kallick will be at the Rogue to launch their new cd Laurie & Kathy Sing the Songs of Vern & Ray.

"Both have voices that can be sweet, yet carry a razor's edge of their own… It's a treat to have Lewis and Kallick recording together again." - John Lupton, Country Standard Time

"Before Laurie Lewis and Kathy Kallick became the highly respected and successful singers, songwriters, and bluegrass bandleaders they are today, they were founding members of the groundbreaking northern California band, Good Ol’ Persons, and forged a lifelong personal and professional friendship that endures to this day. They recorded a collaborative album, Together (Kaleidoscope/1991), on which they performed their wonderful interpretation of the venerable 'Little Annie,’ learned from Vern & Ray. Laurie and Kathy wrote in the liner notes, 'This album is respectfully dedicated to Vern Williams and Ray Park, early sources of inspiration for both of us.' This new album, in which the two perform music exclusively drawn from the repertoires of those early mentors, is the latest coming-together of this multi-talented twosome. It is long overdue." - Randy Pitts, from the liner notes

Laurie & Kathy Sing the Songs of Vern & Ray brings together two of the San Francisco Bay Area’s — and the world’s — best bluegrass artists performing the songs of their highly-esteemed California predecessors. Vern Williams and Ray Parks grew up a few miles apart in the Ozark Mountains of Arkansas, but didn’t meet until they were both living in Stockton in the 1950s. Their hard-core traditional bluegrass in the high lonesome style has found its perfect interpreters in Laurie and Kathy, both of whom learned from and sometimes played with Vern and/or Ray. CDHotlist calls it a “wonderful tribute album [of] straight-up, meat-and-potatoes bluegrass music of the kind that all too rarely features prominent female vocals.

Both Laurie and Kathy have won a Grammy and two International Bluegrass Music Association awards for their contributions to True Life Blues: The Songs of Bill Monroe. Laurie has twice won the IBMA Female Vocalist of the Year award, and has recorded more than 20 albums — with the Good Ol’ Persons, Grant Street, Tom Rozum, and the Right Hands, as well as several solo projects. Kathy has been leading bands ever since co-founding the Good Ol’ Persons. Her latest album, Cut to the Chase, is her 19th release, recordings which contain over 100 of her remarkable original compositions. For an evening of glorious real-deal bluegrass, with vocal and instrumental fireworks, don’t miss Laurie Lewis (fiddle, vocals) and Kathy Kallick (guitar, vocals) with Tom Rozum (mandolin, vocals), Cary Black (bass, vocals), and Patrick Sauber (banjo).