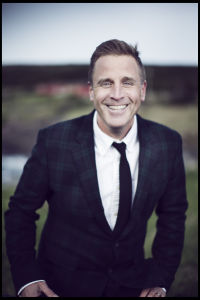 1967 is the year that a counterculture movement in San Francisco for love, peace and happiness briefly connected thousands of people and turned into “The Summer of Love”. Hippy culture became a phenomenon, everybody wanted to dress like a member of Sgt. Pepper’s Lonely Hearts Club Band, and music was the glue that temporarily kept the idea together.

3000 miles away, in the middle of the cold and unforgiving North Atlantic Ocean, Séan McCann was born in Carbonear, Newfoundland, a town of fisherman and shipbuilders with a population of barely 5000. Despite the geographical and cultural distance, his life was about to take shape through a journey that could have been ripped from the pages of that 1967 San Francisco fairy-tale—a journey for peace, love, and happiness through music—but it wasn’t going to be easy.

Séan’s love for Newfoundland and Labrador folk songs shot him to international fame as a founding member of the renowned group Great Big Sea. After millions of albums sold, countless hit songs, and record breaking tours around the world, Séan realized that his 20 years with the band had to stop. Music is meant to connect, heal, and bring happiness. While Séan was giving that to thousands of people a night he was slowly losing his own way. Instead of seeking truth he was hiding behind his music. This was unfair to both himself and his fans so he left the band and started over.

In January 2014 Séan released his first post-GBS album. Produced by Joel Plaskett, “Help Your Self” is the sound of a man facing his demons and ultimately overcoming them. The songs helped him deal with his issues of addiction and abuse and showed him how to find strength in pain. It reminded him of the power of music which at one time would have been used to cast a Friday night spell over a sold out hockey arena on a Monday, but now finds him touring the country as a solo artist in intimate venues where he can sincerely connect with his audience in the way he always hoped to—face to face. Séan has also found himself using music as therapy, working with people who face physical, mental, and addiction challenges, and has become a sought after speaker trying to help others to help themselves find light through the darkness.

Séan’s journey to find his own peace, love, and happiness continues through his new music. “You Know I Love You” is a happy collection of songs sung by a man intent on sharing his joy directly with you. The world has changed. Today the only thing left between Séan’s music and those who wish to share it is a cellphone. Despite how small social media has made the world, and how it has included all of us into the same conversation with a simple hashtag #, the basic human quest for a connection to something real is too difficult to fit in just 140 characters. Luckily, through the years of technological advancement and subsequent social change, two universal energies remain constant— Music and Love.

Produced once again by Joel Plaskett, and with an original piece of artwork per song by singer/songwriter Meaghan Smith, Séan is trying to find a balance somewhere between analogue and Tinder in a world where the connection we all want can’t seem to keep up with technology. Love and music... maybe the hippies were on to something.