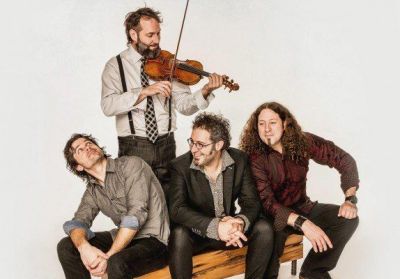 Le Vent du Nord was just awarded the Felix for Traditional Album of the Year for their album Têtu.

Mouth music and musical families. Deep history and playful innovation. Quebec’s Le Vent du Nord knows how to turn the lost past into intense and beautiful performances that push their roots in striking global directions. The group is blazing a path that connects their Québecois roots to the wider world, in both arrangements and on stage.

Since their founding in 2002, Le Vent du Nord have become compelling Francophone ambassadors, winning critical acclaim and audience adoration across Europe, Oceania and America. The quartet has performed well over 1,400 concerts, racking up several prestigious awards, including a Grand Prix du Disque Charles Cros, two Junos, a Canadian Folk Music Award, “Artist of the Year” at the North American Folk Alliance Annual Gala and finally, this year, a Felix Award for Traditional Album of the Year!

The band delivers catchy songs and tunes, some taken from the Québec traditional folk repertoire while others are original compositions. The group has a rich and varied instrumentation, well-polished musical arrangements, and wonderful vocals.

Having given the Tromper le temps concert 300 times, Le Vent du Nord are presenting their new show with the songs from Têtu, the group's 8th album.