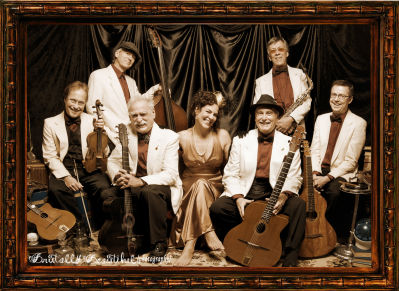 Deanna Knight & the Hot Club Cabaret has become a tradition at the April in Paris Festival. Deanna carefully curates a clever cast of local talent to add pizzazz and excitement to the evening. Alongside her vintage flare she will sprinkle in the tapping toes of Alex Clancy as well as the return of burlesque darling Miss Lydia DeCarllo. Mixing the night up with swing, bossa, tango and more, The Hot Club of Mars is Vancouver’s most eclectic gypsy swing ensemble. This year we will all delight in the charms of Jack Garton as emcee and perhaps he will share a song or two with the band. Enjoy the Parisian atmosphere created by Sue Baines on accordion and bring your dancing shoes… as you just might be inspired to get out of your seat and shake it!

Travel back in time to the early acoustic swing era of the 1920’s & 30’s and experience one of Vancouver’s most eclectic gypsy-jazz ensembles. Chanteuse Deanna Knight shares sassy and sultry vocals alongside the driving rhythms and hot solos of Michael Dunn and the Hot Club of Mars. Rooted deeply in the rhythms of Django Reinhardt, this unique ensemble adds to a traditional sound with melody, charm and loads of fun. Enjoy a clever repertoire, spanning a full century from historical tangos written in the early 1900’s to contemporary songs of today. Deanna weaves her lyrical magic around swing classics, tangos, bossa, boogie and original compositions. Described as “stand out, unmistakable and smooth as fine whiskey” Knight celebrates over a dozen years with “multi-instrumentalist and ace luthier Michael Dunn and the Hot Club boys (Mark Dowding on flute, sax and harmonica; Tom Neville on fiddle; Steve "Bugsy" Szabo and Don Kellett on guitars; and Charlie Knowles on bass) who use their Hawaiian, resonator, and Gypsy-jazz guitars to "slice and dice 50 shades of swing with admirable gusto.” Gypsy Jazz from traditional to the unusual will unfold before your eyes and ears. Just try to keep your toes from tapping.