from the Isle of Man
Concert poster 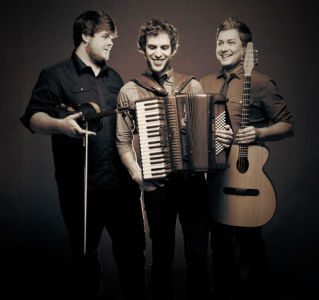 The unique sound of traditional Manx music is the Celtic world’s best kept secret. This is set to change with the introduction of Barrule, the award winning trio hellbent on taking the Isle of Man’s music to a much wider audience.

With bold but sensitive arrangements, the trio presents a fresh take on traditional and contemporary Manx music. While sharing common ground with its Celtic cousins, as well as the English tradition, Manx music has retained its own particular and inherent Manxness: an atmosphere evoked by the music that speaks of the natural beauty of the island and the lives of its inhabitants.

The trio’s award winning debut album, self-titled Barrule, showcases a diverse collection of material from rousing marches, jigs and reels to sorrowful slow airs and beautiful songs sung in the Manx Gaelic language. Their follow up album, Manannan’s Cloak, was recorded in December 2014 in the historic St. Bridget’s Chapel, in the Isle of Man’s Nunnery grounds. With producer Andy Seward at the helm, Manannan’s Cloak takes the trio’s emphatic sound to the next level. Released in May 2015, Manannan’s Cloak is already receiving excellent reviews and continues to further the trio’s mission of promoting Manx music across the globe.

“An exciting sound – real zest and quality” - The Telegraph

“Players of conviction and passion” - The Scotsman