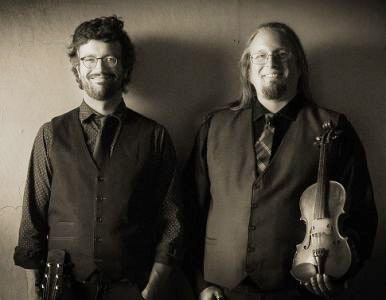 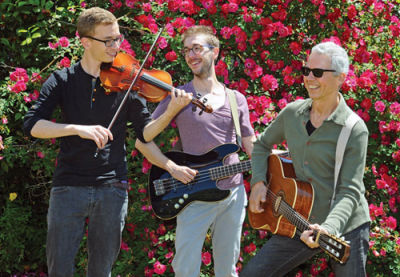 Yann & Pascal started their musical journey 20 years ago, busking on the streets of Montréal. They have since played over a thousand shows in twenty countries with the Quebecois trio Genticorum, and they now return as a duo to present an intimate show based on the close musical bond forged by years of touring together. Yann and Pascal are both master entertainers, and this format provides plenty of space for their musical personalities to shine. Pascal’s fiddling, Yann’s guitar accompaniment, and the duo's vast repertoire of traditional songs and tunes are all presented with elegance and effortless musicianship.

Yann Falquet is a very active and creative acoustic guitar player on the Québécois music scene. He has explored many styles of music and completed a Bachelors degree in Jazz. Since then, he has developed a personal guitar style for Québec folk music, inspired by the playing of the accompanists of different cultures (Brittany, Scandinavia, Ireland, North America).

His involvement in the province's traditional music scene has brought Yann to perform on numerous recordings, and to tour regularly throughout Canada, the U.S., Europe and Australia with his main project Genticorum. He also toured for three years with the award winning Celtic and world group The McDades.

Yann has taught his guitar style at the Irish World Academy of Music and Dance in Limerick, at the Goderich Celtic College as well as for Alasdair Fraser's Fiddle Train and Sierra Fiddle Camp.

Pascal Gemme is a leading light in Quebec’s traditional music scene.Known as much for his original compositions as his fine interpretation of traditional tunes, Pascal is the fiddler, singer and arranger of the band, Genticorum, whose CDs have met with critical acclaim in several countries.

From a young age, the fiddle music and songs of his native province have captivated him.  After graduating with a degree in composition and band arrangements at Montreal’s St Laurent College, he immersed himself in the traditional music around him, playing, collecting and recording music found all over Quebec.  Pascal has developed a vast knowledge and is a leading exponent of the music.

Pascal is now as much in demand as a teacher as a performer.  He has been teaching weekly at the Ecole des Arts de la Veillée in Montreal since 2003, as well as at music workshops and master classes around the world, including the Irish World Academy of Music and Dance in Limerick (Ireland), the Goderich Celtic College (Ontario - Canada), The festival of American Fiddle Tunes in Port Townsend (Washington - USA), the Alasdair Fraser's Fiddle Train and Sierra Fiddle Camp (California - USA) and recently the Quasitrad music camp (Australia).

Pascal also works as a music producer, with his CD, “L’Amant Confesseur” nominated for a Canadian Folk award, as a studio musician, and recently,  as the  artistic director of the Sutton Fiddle festival, QC.

Described as “fast-rising” (The Georgia Straight) and a “coup-de-coeur” (Radio-Canada/CBC), the Gabriel Dubreuil Trio is a 'Swing-grass' group from Vancouver, British Columbia, Canada. They bring an innovative fusion of music from the Celtic and North American fiddle traditions and Jazz to the stage. The trio is comprised of Jay Knutson on guitar, William Ross on bass and Gabriel Dubreuil on violin. The trio have just released their debut album "Back To Back Bay". Gabriel Dubreuil is a classical, folk and jazz violinist from North Vancouver. He has toured Canada, the United States and the UK with artists and bands from India, Israel, Scotland and North America. Dubreuil obtained his Bachelor of Music (2016) from the ground-breaking Berklee College of Music in Boston, MA, and works as a private educator and a studio musician.  Dubreuil has performed and hosted workshops in venues ranging from Boston Symphony Hall, Brooklyn’s Jalopy Theatre, Club Passim and Vancouver's Festival Du Bois.

Jay Knutson is a talented singer/songwriter and multi-instrumentalist and also an artistic director of the dynamic youth fiddle orchestra "North Shore Celtic Ensemble". Knutson is from North Vancouver and a founding member of the seminal Canadian folk band "Spirit Of The West" and has toured and performed both "solo" and with a host of artists/bands over the past 30 years. The Chronicle Herald (Halifax) said of Knutson, "He puts the soul back into music, fun back into instruments and conviction back into lyrics".

William Ross is a bassist from New Westminster. A five-time award winner at the Envision Jazz Festival, Ross entered the Vancouver jazz scene in 2010 and released his first album Nomads in 2015. He is currently a private educator working for the North Shore Celtic Ensemble.