with a Workshop at 2pm and a Film at 6pm!
Concert poster 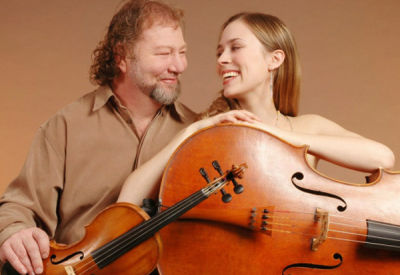 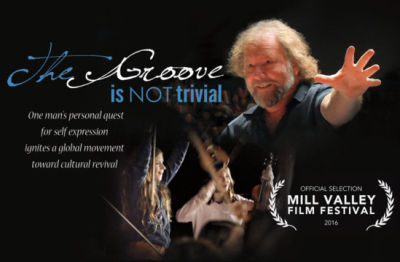 Documentary - The Groove Is Not Trivial

The musical partnership between Alasdair Fraser, long regarded as one of Scotland’s premier fiddle ambassadors, and the sizzlingly-talented young California cellist Natalie Haas may not seem an obvious one. Fraser, acclaimed by the San Francisco Examiner as “the Michael Jordan of Scottish fiddling,” has a concert and recording career spanning 30 years, with a long list of awards, accolades, television credits, and feature performances on top movie soundtracks (Last of the Mohicans,Titanic, Stone of Destiny). Fraser has been sponsored by the British Council to represent Scotland’s music internationally, and received the Scottish Heritage Center Service Award for outstanding contributions to Scottish culture and traditions.

The Duo has four recordings: Abundance, Highlander's Farewell, In the Moment and the award winning Fire & Grace — all on Fraser’s own Culburnie Records label. The CDs display the duo’s dazzling teamwork, driving, dancing rhythms, and their shared passion for improvising on the melody and the groove of Scottish tunes. “Haas is the percussive power to Fraser's fiddle fireworks, providing syncopated, bowed underpinnings to his melodies and solos,” writes Kira Schlechter of The Patriot News. The pair are about to launch their 5th album.

The duo has performs frequently in Europe, and throughout the US and Canada. They have been featured on NPR’s Performance Today, the Thistle & Shamrock, and Mountain Stage, and represented Scotland at the Smithsonian Museum’s Folklife Festival. In addition, Fraser and Haas have busy teaching schedules, including summer fiddle courses in the US, Scotland, and Spain.

THERE'S ALSO AN INSTRUCTIONAL WORKSHOP ... led by Alasdair and Natalie from 2pm to 4pm on the day of the performance. It will be open to all players of all instruments. It's all about playing in a collaborative way, emphasizing the "groove" in the music. Renowned performer and master teacher of the rich fiddling tradition of Scotland, Alasdair inspires us to higher and deeper levels of self-expression within an embracing community of listeners, learners and like-minded folk. Workshop admission is $30, or only $15 with a concert ticket. RSVP at concerts@roguefolk.bc.ca to register.

AND THERE'S A DOCUMENTARY MOVIE TOO ... As a special added attraction, we will be presenting the Canadian Premiere of a recently released and acclaimed documentary about Alasdair Fraser at 6pm on the day of the performance. The Groove is Not Trivial follows Alasdair’s personal journey in search of self expression, a quest that has led him to dig deep into his Scottish musical roots. There he finds a universal pulse — a  groove — that runs through his virtuosic performances with cellist Natalie Haas and his dynamic teaching at his wildly popular, freewheeling fiddle camps in California, Scotland, and Spain. At his gatherings around the world for musicians of all ages and abilities, ‘the groove’ is a through-line from the past that sparks hopeful possibilities for the future. The  movie is being shown in Canada for the first time, and it runs for just over an hour, starting at 6pm. It is included in the concert ticket, and there will be pizza from a local restaurant available (by donation) from 7pm.

This is the first time Alasdair & Natalie have presented a workshop and the movie and concert on the same day. Anywhere! The day is a public holiday (Family Day) so we are honoured to mark the occasion with a full day with two of the finest musicians in Celtic music today, celebrating the legacy of Scots immigration and pioneers in BC in this special year! Don't miss this unique celebration of Scottish music and its roots in the groove!