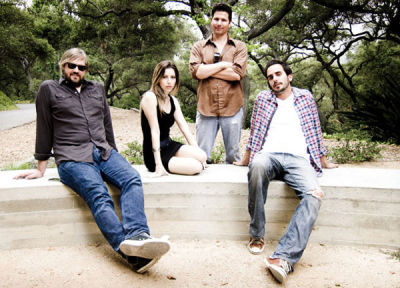 The Gonzalo Bergara Quartet (GBQ) explores a modern variant of the 1930s Django Reinhardt-inspired sound. The Quartet's first CD, Porteña Soledad, was Editor’s Pick in Guitar Player Magazine, and Vintage Guitar Magazine called it a "masterpiece." The music is heavily influenced by Django Reinhardt and the Hot Club of France, as well as the traditional jazz and music of Bergara's true home, Buenos Aires. "Gonzalo Bergara’s music exists in a way that very little music does. He has lavished such care on every phrase, built each arrangement with such lapidary precision and pared away anything extraneous, the music becomes sculpture. It has weight, density, gravity. This is serious….and deeply moving." The Quartet's newest release, Walking Home (2012), is available on CDBaby.

The quartet also features Leah Zeger on fiddle and vocals, Jeffrey Radaich on rhythm guitar and Brian Netzley on acoustic bass. We saw them at Djangofest NW on Whidbey Island and were mightily impressed!! It's a unique chance to keep the spirit of our April In Paris festival - and gypsy jazz - going into the merry month of May!