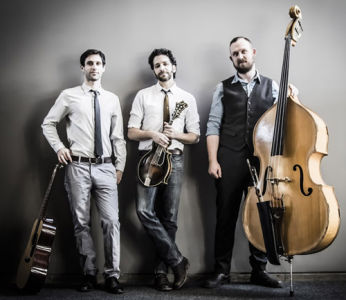 Mando maestro Andrew Collins finds himself – through no actual fault of his own – at the epicentre of Canada’s burgeoning acoustic/roots music scene. He didn’t invent it – but he's certainly been a contributor, having co-founded seriously noteworthy Canadian bands like the Creaking Tree String Quartet, the Foggy Hogtown Boys and, more recently, the Andrew Collins Trio. That’s not to mention the fact that this prolific, robust performer – comfortable on mandolin, fiddle, guitar, mandola and mandocello – composes, produces, arranges, writes and teaches across multiple genres, including a popular collision of bluegrass, folk, blues, jazz, old-time, swing, Celtic and classical.

As Collins gathers up innumerable Juno nominations and Canadian Folk Music Awards won by these various ensembles, he’s zeroing in on the work he does with his beloved trio.  Now joined by fellow string guru, Mike Mezzatesta - who's versatility and mastery shine through on guitar, mandolin, fiddle and mandola, and in-the-pocket  James McEleney, holding it down on the bass, mandocello and vocals. On their newest release, And It Was Good,  all three players  continue their push into new territory, as they assault the 7 days of Creation, brilliantly rendering each day’s creation story to musical fruition in this new, Chamber Grass disc. And It Was Good IS good – a labour of love inspired by the late Oliver Schroer, if not overseen by his musical specter. The result is a lush-sounding, multi-layered composition bringing fresh meaning to an age-old story while demonstrating the depth of musicianship from each of these three inspirational players.

Despite taking musical cues from David Grisman, Andrew, Mike and James have ventured further down this path of Newgrass and beyond – melding multiple genres after absorbing each of their boundaries – all towards extrapolating brave new musical worlds that can only be thought of as their own ‘creation’. Nothing less will do. You won’t be able to put any box around what the ACT does – no matter how hard you try. And that’s the way they like it, on disc and stage. That’s certainly the Andrew Collins Trio's mission in life – to swing open new doors, towards a reimagining of how we listen and what we listen to.

“Light of touch, fast of wit, copiously imaginative, and a musical scholar of the highest distinction, Toronto mandolin virtuoso pulls out all the stops” - Toronto Star

“To call Andrew Collins a master of the mandolin would be putting it mildly.... artfully arranged string music perhaps best described as 'chambergrass' shines through – 4/5 stars" - Exclaim! Magazine

It all comes down to common sense according to The Nordic Fiddlers Bloc. The melding of virtuoso fiddle playing from Norway, Sweden, and Shetland to create a very specific, unique sound, that at the same time illustrates their own individual musical traditions.

The three fiddle players involved are Olav Luksengård Mjelva from Norway, Anders Hall from Sweden, and Kevin Henderson from Shetland. Each one in their own right internationally regarded for their fiddle playing, but when the three come together to form that Nordic trio, things take off on a fresh path.

Apparently it was Anders Hall who had the idea to bring together not just the three historically-linked Scandinavian Scotland fiddle traditions, but also three of the circuit’s finest players. “There are a lot of connections between the three countries music-wise,” Hall told me. “We wanted to bring the three traditions together, but it’s fun playing together, and that’s the main thing.”

Hall is acclaimed as one of Sweden’s foremost fiddlers, and is a member of well- known Nordic folk band Sver, along with fellow Fiddlers Bloc member Olav Luksengård Mjelva. He comes from a family of musicians and started playing at the age of seven by attending music school in his home- town of Arbrå. “I tried to learn classical music a little,” he explained, “but I didn’t like it, I couldn’t play the tunes that I wanted to so I skipped it.” That is something he regrets. “It would be fun to have that skill as well, to play classical music. When you play fiddle for many years you get interested in how some cultures play the fiddle, the different techniques and the different tools to make different sounds.” He paused slightly. “The craft of fiddling… there are great skills in classical musicians; little tricks.”

Fellow Sver member Olav Luksengård Mjelva is also one half of the unique folk duo Rydvall/Mjelva. He started fiddle lessons at the age of six in his home town of Røros in Norway. “I played 25 minutes every week and it was quite boring,” he laughed. Later on though he “got some fiddle friends” and that social element made all the difference. By eighteen he was drawn to the hardanger fiddle, Norway’s national instrument. “The hardanger is usually tuned a bit higher and the most difficult thing is to find the right key to play tunes in,” he pointed out. “I could just tune it down like a normal fiddle, a lot of hardanger fiddlers do that, but it doesn’t sound the same.” Further adding to the rich sound of the trio, Mjelva also plays the octave fiddle, which, strung an octave lower than standard fiddle tuning, he describes as “quite a rusty sound as the body is too small for the low tones”.

Kevin Henderson, from the Shetlands, comes from a family of fiddle players. His grandfather was “a huge fan of fiddle music and that kind of gave me the bug”. He attended private classes for a while but they came to a natural end. “I was keen to start with,” he laughed, “and then computers and football took over for a while.” Luckily the Shetland school system provided classes with Willie Hunter, the renowned folk fiddler who was pivotal in rekindling the fiddling traditions of the Shetland Islands. “He was an amazing teacher and just an amazing man,” Henderson said fondly of the man who passed on those traditions to his pupil. “It wasn’t just about the fiddle; he was quite a life coach… a kind of father/grandfather-type character in my life I would say.” With Hunter’s help the die was cast. The teenage Henderson went on to found folk group Fiddlers’ Bid, and nowadays can be found playing with eminent folk bands Boys Of The Lough and Session A9.

Nordic Fiddlers Bloc have two albums under their belt. They also have 25 songs gathered for a third album, but between touring and all of their individual projects, Nordic Fiddlers Bloc need to plan well in advance to bring this to fruition. “We have some rehearsal time booked in the calendar,” Hall told me, “but we really need to book more.” Meanwhile they will “probably be touring the States in March or April”, and UK residents are advised to keep an eye out in the spring, as May could be bringing another wave of Nordic fiddle back to these shores.

“I surrender unconditionally to these master musicians. The worn concept of “tradition and innovation” have rarely been used as smart as this” – LIRA

“On the evidence to hand, pure fiddle doesn’t get much better than The Nordic Fiddlers Bloc.” – Folkworld