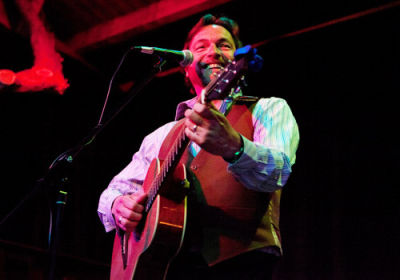 Send Email
This concert is sponsored by DAN BOWDITCH. This sponsorship is in support of local artists and the Rogue Folk Club, which provides good venues to promote these artists.


Now living in Vancouver, contemporary folk singer-songwriter Chris Ronald emigrated from his native England in 2002. Influenced by many artists from the '60s onward, Chris' music has been described as “Canadian folk with British roots.” Stuart Derdeyn of The Province likened it to “the country and folk that came out of Laurel Canyon and the British Isles in the mid-seventies.”

Chris first got hooked on songwriting at age 15 when he put to music a poem he wrote in high school, but he only started to go public after moving to Canada then self-producing his first two albums: Pacific Time (2004) and Turning Tides (2011). In a glowing Georgia Straight review, Ken Eisner praised Chris' songwriting and “beautifully clear tenor voice” and wondered “where his obvious talent has been hiding for so long.” Encouraged, Chris went one step further on his next project hiring ace producer and multi-instrumentalist, John MacArthur Ellis. The resulting Timeline (2014) album catapulted Chris to a new level in his career with, among other accolades, a nomination for “Songwriter of the Year” at the 2014 Canadian Folk Music Awards.

Chris' showcase performance at the CFMAs caught the attention of esteemed Canadian folk label, Borealis Records, who signed him for his next record. Here's a teaser for the new album - https://youtu.be/gue33RgZuZ0

In live performance, Chris draws on his abilities as a highly skilled singer, storyteller and musician (guitar, harmonica, ukulele) to deliver a show that is both captivating and unique. Ronald balances national and international touring with a busy family life.