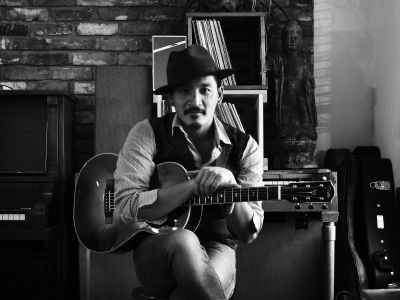 Buckman Coe has launched an international career from Vancouver over the past decade starting out as an acoustic folk singer-songwriter in cafes and house concerts from East Vancouver to Kitsilano. Several early big breaks put him in front of large audiences at festivals such as Salmon Arm Roots & Blues and Oregon Country Fair. His music evolved as he grew a band and incorporated Americana, Soul, World, and Reggae into their sound. Four albums later he has taken his music to Australia, Asia, Hawaii, and all over Western Canada.

While his music has always had a focus on the kinder potentials of humanity while addressing social and environmental issues, along with a healthy dose of love songs, this 5th album is a return to more of his folk and acoustic roots. This album is grounded in experiences and love for the Pacific Northwest, and is lushly arranged with hollow-bodied instruments making a sonic bed for soulful melodies and lyrics to grow forth from. All the ingredients of the album will be present this evening for a celebration of this album. Upright bass, cello, viola, acoustic guitar, banjo, lap steel, piano, and organ from some of Vancouver’s best veteran musicians.

The album is an exploration of place and of responsibility to know where one is, where one is from, and to do what one can to protect and show that love for a place and its people. Buckman has drawn inspiration from his involvement in local and international movements to honour the earth, its indigenous peoples, and to hopefully provide a future for coming generations. In usual fashion his music seeks to uplift and inspire his listeners with beauty and playfulness.

A prolific writer, this is the first of two records that Buckman will release in 2018, with the help of Creative BC, the Province of British Columbia, and FACTOR. All of whom he thanks profusely for the opportunities! This album release concert will be a rootsy return for Buckman and his band with some revisitations of some of his folky favourites from the past 4 records.

Readers of WE Vancouver voted Buckman Coe as the Best Band in Vancouver, and readers of the Georgia Straight voted him the second best indie band.

“If this were 1973, back when singer-songwriters ruled the earth, with a couple of breaks and a bit of AM radio airplay, he’d be busy chasing gold-record royalty cheques and house-hunting in Laurel Canyon” – Mike Usinger.

This event is made possible with assistance from the BC Music Fund and Creative BC.