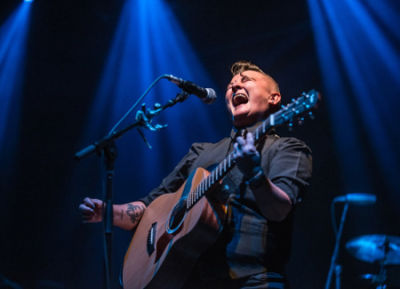 We are pleased to present one of the most memorable artists who appeared at the Vancouver Folk Music Festival in Jericho Beach Park in the summer of 2019.

Irish Mythen, singer, songwriter, recording artist and award nominee was born and raised in Ireland. With four albums, including the ECMA-nominated ‘Open Here’, Irish has shared the stage with the likes of Richie Havens, Sylvia Tyson, The Dubliners, Shane MacGowan, Gordie Sampson, Matt Andersen, and the list goes on. Her live performances are a thing of wild emotion as she pours heart and soul into every word she sings. She has a way of delivering her songs that leave you in awe of her vocal talent and remembering the show, the songs and the performer long after you’ve walked away.

Irish says: "This island (Prince Edward Island) creates music and musicians, art and artists. I found a shift to take things more seriously when I moved here." And she did just that. Her last release, Little Bones, gained her recognition around the globe, including a 2020 Juno nomination for Contemporary Roots Album of the Year, seven Music PEI 2020 nominations and two wins — Touring Artist of the Year and Roots Contemporary Recording of the Year, and a Canadian Folk Music Nomination for Solo Artist of the Year. Her previous self-titled album, Irish Mythen, garnered awards and nominations from Music PEI, East Coast Music Association, Folk Alliance International and SOCAN. Write-ups in Australian Guitar Magazine, Rolling Stone and a plethora of other print and online media world wide have helped plant Irish firmly on the map of Must-See Artists. She has just finished recording a new album in Denmark.

Irish Mythen is one of the few performers I have seen who bowls me over each time I see her, she makes me cry with her poignant lyrics and passionate vocals and makes me laugh with her cheeky Irish banter, I love her work and cannot understand why the whole world doesn't agree with me. Now living in Prince Edward Island in Canada, Mythen has played worldwide and at last seems to be gaining the recognition she deserves.
~ Rachel Griffin, Brighton and Hove News