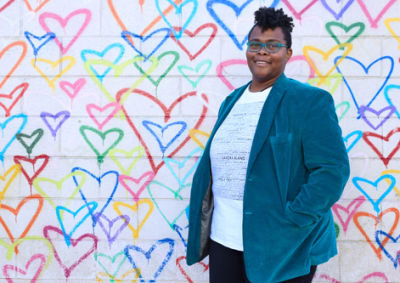 Already being hailed as “the next Woody Guthrie,” Crys Matthews is among the brightest stars of the new generation of social justice music-makers. A powerful lyricist whose songs of compassionate dissent reflect her lived experience as what she lightheartedly calls "the poster-child for intersectionality," Justin Hiltner of Bluegrass Situation called Matthews’s gift "a reminder of what beauty can occur when we bridge those divides." She is made for these times and, with the release of her new, hope-fueled, love-filled social justice album Changemakers, Matthews hopes to take her place alongside some of her heroes in the world of social-justice music like Sweet Honey in the Rock and Holly Near. Of Matthews, ASCAP VP & Creative Director Eric Philbrook says, “By wrapping honest emotions around her socially conscious messages and dynamically delivering them with a warm heart and a strong voice, she lifts our spirits just when we need it most in these troubled times.

”Matthews began performing in 2010, but cemented her acclaim at Lincoln Center as the 2017 New Song Music and Performance Competition grand prize winner. That year she also released two new projects—her album of thoughtful songs on love and life called The Imagineers, and her EP called Battle Hymn for an Army of Lovers, which tackles social justice themes. Matthews also won the People’s Music Network’s Social Justice Songs contest at the Northeast Regional Folk Alliance. Loyal fans quickly followed as Matthews racked up performances at large music festivals and prestigious venues across the country including the Sundance Film Festival, Kerrville Folk Festival, and locally at venues like The Birchmere, TheHamilton, Millennium Stage at the Kennedy Center, and Jammin' Java. In her TedTalk about difficult conversations called "Sing, Don't Shout—An Alternative Approach" Matthews spoke about being born and raised in a small town in southeastern NorthCarolina by an A.M.E.preacher, and how she witnessed the power of music from an early age. A former drum major and classically-trained clarinetist turned folk singer, Matthews is using her voice to answer Dr. Martin Luther King's call to be "a drum major for justice."

“I believe in hope,” Matthews said. “As a social-justice songwriter, it is my duty to keep breathing that hope and encouragement into the people who listen to my music.” And, from the title track to the last track, Changemakers does just that all while tackling some heavy topics like immigration, the opioid crisis, Black Lives Matter, and gun safety to name a few.“ Ani DiFranco said, “People used to make records as in a record of an event," said Matthews, “so I hope that these songs will serve as a time capsule, a record of the events of the last four years and what it was like to live through them.” Crys Matthews's thoughtful, realistic and emotional songs speak to the voice of our generation and remind us why music indeed soothes the soul.

“A passionate and powerful blend of infectious Americana melodies and folky instrumentation, Matthews delivers her honest songwriting through a beautifully raw and unfiltered lens. Oozing soul, her voice bleeds with emotion and gratitude, while simple piano melodies and upbeat percussion fill you with appreciation and love for the people around us who fight for change. - Ear Milk

"Matthews’ music helps to recruit those allies. Her songs encourage confrontation with tough issues. In the great tradition of folk music, Matthews brings listeners in with sweet sounds that grab them by the heart, and just as they are cradled in her soulful voice and her deft handling of an acoustic guitar it’s as if Matthews says, “Now that you’re here, we’ve got some things to talk about. - Pride Source

Our COVID-19 Policy: federal health officials are urging Canadians to wear face masks indoors and continue following other public health precautions. We agree with this recommendation. We offer streamed concerts as a safe alternative to attending shows in-person.