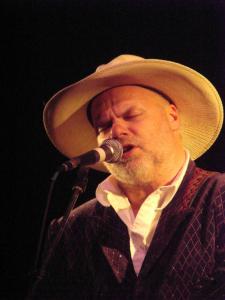 Eaglesmith has followed his muse and the music to wherever it takes him since he left the family farm at age 15 to pursue the hitchhiking and freight-hopping trail of a traveling troubadour. As a result he has forged one of the most distinguished and unique independent careers in popular music from the grassroots upwards, marked by a consistent string of critical superlatives for his work. And now after being a leading light in both the new folk and Americana movements, Eaglesmith stays at the cutting edge of the musical zeitgeist to help spark a rock'n'roll renewal. I still want to be vibrant and I still want to be on fire and I still have passion, he asserts. I don't ever wanna stay in the ghetto.

His restless and relentless muse has already earned Eaglesmith a singular and impressive legacy of achievements. Over the years the Juno Award-winning artist has had his music used in films by Martin Scorsese, James Caan and Toby Keith, scored a hit #1 on the bluegrass charts ("Thirty Years of Farming," recorded by James King), and had his songs included in the curriculum at two colleges. His fans are so devoted that he is the host and centerpiece of a number of music festivals in the U.S. and Canada as well as inspiring the Roots on the Rails rolling music fests and hosting a number of its excursions, plus now in 2010 hitting the high seas with the shipboard Fred Eaglesmith Atlantic Adventure. A popular live attraction in clubs and festivals across North America, Eaglesmith also enjoys fervent followings in Europe and Australia.