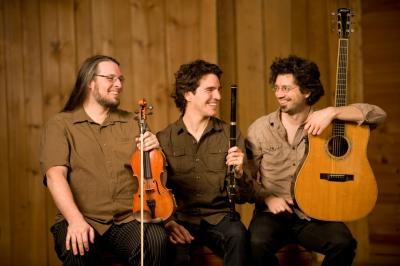 Generous in spirit, meticulous in detail and flawless in execution, the trio - a sonic marvel of synergistic chemistry - never step on each other's toes, deferring to song rather than self - a lesson few learn in a lifetime... HOUR magazine

For a three piece, Genticorum makes a very full and glorious noise, both instrumentally and vocally... This is a band that's going to go places. - SING OUT!

Over the past decade the trad Quebec group Genticorum (Pascal Gemme, Alexandre de Grosbois-Garand and Yann Falquet) has become a fixture on the international world, trad, folk and Celtic music circuit. The trio's four albums met with critical acclaim in Canada, the United States and Great Britain, assuring the band a brilliant future. Known for its energy and its stage presence (and often mistaken for a larger ensemble), Genticorum has given more than 800 concerts in no fewer than 15 countries - and is showing no sign of slowing down: this is a band in high demand.

Firmly rooted in the soil of their native land, the energetic and original traditional 'power trio' also incorporates the dynamism of today's North American and European folk cultures in their music. They weave precise and intricate fiddle and flute work, gorgeous vocal harmonies, energetic foot percussion and guitar and bass accompaniment into a big and jubilant musical feast. Their distinctive sound, sense of humour and stage presence make them a supreme crowd pleaser.

With its latest album, Nagez Rameurs (2011 Roues et Archets), the band continues to develop its unique sound, which is at once ancient and modern. Under Pascal Gemme's musical direction, on this album the group is joined by such well-known trad artists as Stéphanie Lépine, Olivier Demers, Nicholas Williams and Grey Larsen, signalling a work of undeniable musical refinement and irresistible raw energy. As with previous Genticorum offerings, here the traditional songs and instrumental pieces are intermingled, resulting in an overall recording that is wide-ranging and rich. The theme of voyages, and more precisely voyageurs travelling the waterways of North America, runs throughout the album, most especially in its title track, "Nagez Rameurs." The album has been nominated for "Album Of The Year - Traditional" at the upcoming ADISQ Awards (The Quebec JUNO) and was voted "Traditional album of the year" at last year's Canadian Folk Music Awards - in which the band also won "Ensemble of the year".

Genticorum is a supremely talented group and they - and the audience - have a lot of fun at their shows!