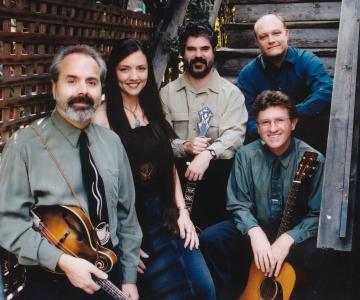 Years of European and North American tours, five critically acclaimed albums, two Juno nominations and two Canadian Folk Music Award nominations... little wonder, the buzz around John Reischman and The Jaybirds continues to grow. Like the mandolinist at its helm, the group fashions a stylish, elegant take on bluegrass that is at once innovative and unadorned, sophisticated and stripped-down, happily old-fashioned, yet unselfconsciously new. To see their live show is to believe it. A genial blend of story-telling and side-show humour provides the backdrop to their studied performance of original songs, instrumentals, and newly arranged traditional material.

Hailing from the variegated ranks of the contemporary West Coast acoustic music scene, each of these 'birds has certainly earned his wings: the list of projects they have contributed to over the years is nothing less than a short list of acoustic power houses. Together, their seamless ensemble work makes for one of the freshest, most tasteful band-sounds on the folk and bluegrass circuit today.

Whether setting the tone for a mournful ballad, laying in fills for one of the group's unique original compositions, or providing essential rhythmic foundation to breakneck speed bluegrass, John Reischman's mandolin acts as the sonic heart and soul of the band and its conceptual touchstone. He is a mandolin master of the highest caliber, having garnered praise from every corner of the music world for his tasteful, classic, and versatile technique bar-none. After cutting his teeth with West Coast groups of now-legendary status (the Tony Rice Unit, the Good Ol' Persons) Reischman has once again reached new heights with the Jaybirds; this time, it is with a singular sound built around his musical tastes and fortified by the intrepid spirit of his musical partners.

With awards for his fleet-fingered fretwork, a Grammy nod for his appearance (with John Reischman) on the Bill Monroe tribute album True Life Blues, and contributions to a slew of IBMA-honoured albums, Jim Nunally has received his share of superlative praise. He always has several projects on the go, including - but not exclusive to - collaborations with Dix Bruce, Keith Little, and David Grisman.

The proof, as they say, is in the pudding. Or in the wild raspberry jam, which British Columbia-based Trisha Gagnon makes herself on her farm and preserves in mason jars. They're for sale, seasonally, during set breaks at Jaybirds road shows. If you take home a jarful, you will no doubt find that the adjective chosen by folk music authority "Sing Out!" to describe Gagnon's voice was apropos in more ways than one: "Irresistible." A less epicurean adjective would not have sufficed, and not only to account for her organic jam-making enterprise: Gagnon brings a perceptive beauty to all she touches. Her many roles in the band - vocalist, bassist, and songwriter - all are informed by the same personal, homespun touch. To hear her explain the inspiration for the song in concert drives home the great virtue she celebrates, and in many ways embodies in her music: a true sense of place. As a grounding force in this band of far-flung and far-flying Jaybirds, for Gagnon, each and every road leads home.

British Columbia-based, Nick Hornbuckle finds his earliest keyboard lessons and his rocker past still have bearing on his influences, which range from The Police, Led Zeppelin, and The Beatles to Flatt and Scruggs, and Beethoven (in the sense that he admires Ludwig's hairdo - no foolin'). He is also a student of old-time music, which informs his unique playing style: a two-finger blend of modal, claw-hammer technique and Scruggs-style bluegrass rolls showcased on all the Jaybirds' recordings. As the Los Angeles Daily News says of his banjo work in a recent review of Stellar Jays: Downright spine-tingling.

Then there's Greg Spatz, a party to far-out beyond bluegrass experimentations with his college roommate Mark Vann of Leftover Salmon, or his post-college roommate, a certain resophonic guitar celeb named Rob Ickes; Greg, a first-call session man with a fiddle style so rapturously soaring, so wildly bluesy only a sweater of Mr. Rogers proportions could temper its fire. Most recently he is proprietor and bouzouki geek of the worldly old-time of Mighty Squirrel. He is also a University teacher and acclaimed fiction writer!