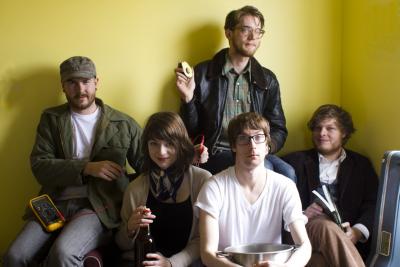 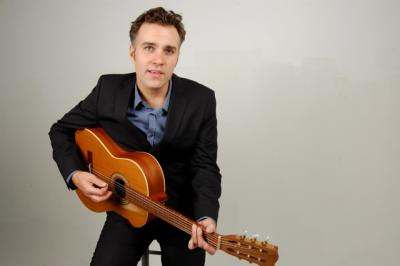 Fish & Bird's latest album, Every Whisper is a Shout Across the Void, marks a major step forward for the young band. The project began in Victoria, BC in 2006 as an acoustic duo, comprised of Taylor Ashton (banjo, guitar, vocals) and Adam Iredale-Gray (fiddle). On their 2007 self titled debut, their take on 'folk' included original songs in odd time signatures and traditional murder ballads with rock beats. 2009's Left Brain Blues was a more mature exploration of the space between folk traditions and reckless creativity, with Ashton & Gray playing multiple instruments on each song, and toying with the formats that inspired them. Some of the friends they enlisted to help fill out the sound on the record and at live shows eventually became permanent members of the band, and now Fish & Bird are the five-piece indie-folk powerhouse we know today. They have weird vocal improv sections, they rock out in 11/8, sometimes it seems like they're playing bluegrass, and they might make you cry.

Every Whisper is a Shout Across the Void was released in April 2011. Featuring the full ensemble and some of their strongest material yet, it redefines the Fish & Bird experience yet again. Where 2009's Left Brain Blues took listeners on a roller coaster ride of varied genres and instrumentation, Every Whisper comes off more like a live show, with all the band's influences and musical ideas woven tighter into a more cohesive sound. The arrangements are cleaner, the playing is stronger, and Ashton's singing is at its best, this time finding company in backing vocals from Iredale-Gray and bassist Zoe Guigueno. Fiddler Adam Iredale-Gray is Fish & Bird's resident recording engineer. In the 2 years since Left Brain Blues, he has cut his teeth on a number of other recording projects for a handful of other western canadian artists, and the experience shows on Every Whisper. The album is more lyrically cohesive, too. Expanding on themes hinted at on the second album, Every Whisper explores the relationship between reality and perception. Taylor Ashton's lyrics explore the fragility of human interactions, and the fictions we all weave about our own worlds whether we acknowledge them or not.

Reid Jamieson is a classic Canadian heartbreaker with an incredible voice, therapeutic lyrics and a magical way with melodies. Born and raised in Toronto, Reid moved west to beautifulVancouver BC to write and record while performing regularly with CBC's Vinyl Cafe Orchestra. His new record Staring Contest features the track "RAIL" that just won the grand prize for folk in the John Lennon Songwriting Contest.

In the fall of 2009 a stripped down preview of 6 new original tracks (later to be revamped on Staring Contest) could be heard on the limited run EP Courting Juniper produced by Byron Kent Wong (David Usher, The Crystal Method). Its now 2012 and his new full length, all original (and self funded) album Staring Contest is here and features Samantha Parton (Be Good Tanyas), Anne Lindsay (Blue Rodeo) and Vinyl Cafe bandmate John Sheard (Dan Hill, The Henrys). Recorded at various home studios with good pal and drummer Michael Frost of Blackfish Sound in Vancouver. Garden gnomes, unstoppable trains and no less than three proposals (!) can be found in the lyrics of this unabashedly romantic collection.

Reid will be heading out with Stuart Mclean on the Vinyl Cafe Christmas tour this November. To celebrate, Reid is releasing an eclectic collection of winter-themed songs, especially chosen to warm your soul when nights grow cold. Recorded at home alone, Reid takes a holiday from the usual well-worn fare with a couple of seasonal originals, as well as luscious interpretations of Gordon Lightfoot, Bruce Cockburn, Nick Lowe, Willie Nelson, Tori Amos (!) plus a few festive surprises. A rare live performer, on stage Reid has a way of connecting with an audience that is at once intimate and universal, whether solo or performing with talented friends. Along with his compelling vocal style and impressive guitar work are songs that draw you in with cautionary tales of love and lies, causing tears and laughter by turns. You won't want to miss what he does next so please stay tuned for more from this tender troubadour.

He's become a favourite in the Canadian heartland. But, a record as good as 'Staring Contest' shouldn't be held back by radio frequencies, regional borders or time zones. Its simple songs are endearing and unforgettable and should expand his audience to a size that reflects his undeniable talent. - Doug Heselgrave, NoDepression magazine