Get the Flash Player to see this player.

From the Feb 15 Celt in a Twist podcast

"traditional music at its most seductive." — Daily Telegraph
This is true Gaelic music. Come have a listen. 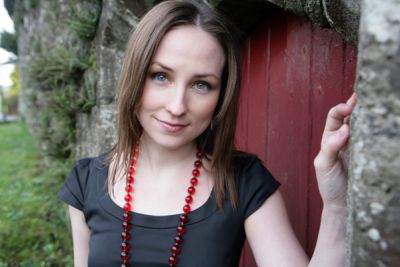 Bringing centuries old songs from the windswept islands of the Hebrides to a modern audience, Julie remains steadfastly true to her roots in North Uist. If you haven't heard her before, be prepared to be surprised by her music and her "breathtaking vocal power" (Folking.com).

Julie Fowlis is a talented singer and instrumentalist from Scotland. She is the BBC Radio 2 Folk Singer of the Year 2008 and in a few short years she has taken the music scene by storm, gathering a small army of fans around the world. she is somewhat of an enigma as she sings in a language only understood by around 60,000 people - which accounts for only approximately 1% of the population of Scotland. She sings in Scottish Gaelic and spends her time touring around the world bringing ancient songs form the Hebridean Islands to new audiences. She is an accomplished musician as well - playing Highland bagpipes, smallpipes, whistles, oboe & cor anglais and three waltzes on the one row melodeon.

Recently Julie has delved a little into broadcasting, and has had the opportunity to present two flagship music programmes on BBC Scotland - the traditional music programme "Travelling Folk" and the world music show "Global Gathering". A one hour documentary on Julie and her musical travels, entitled "Bliadhna Julie/Julie's Year" was also broadcast by the BBC in 2007. She was publicly voted Gaelic Singer of the Year 2007 at the Scots Trad Music Awards and her album "cuilidh", produced with husband Eamon Doorley, was voted "Album of the Year" at the same awards.

Julie Fowlis will perform the only Canadian date on her short tour of North America this February with her husband, Eamon Doorley - of Danu, young Shetland fiddle diva Jenna Reid, and Dublin guitarist Tony Byrne.