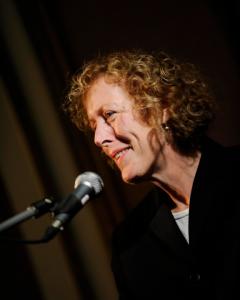 Laura Smith is a Canadian folk singer- songwriter with a remarkably rich and distinctive voice. She is best known for her 1995 single "Shade of Your Love", one of the year's biggest hits on adult contemporary radio stations in Canada, and for her adaptation of the Scottish folk song "My Bonnie Lies over the Ocean" which she entitled "My Bonny". She has received several nationally recognized awards for her music.

Smith released her debut album in 1989. Her second album, B'tween the Earth and My Soul (1996) brought her national acclaim and earned her two East Coast Music Awards (Female Artist, Album of the Year) and two Juno nominations. The next year, 1997, she received a Gemini Award. She continued to work through the 2000s including two seasons on stage in role of Marilla in Anne and Gilbert, the Musical at the Confederation Centre of the Arts, Charlottetown. However through the decade she suffered three debilitating accidents which resulted in chronic pain. This led to the use of increasingly stronger prescription drugs which eventually led to depend- ence. She disappeared from the music scene for a time, but by 2010, she was performing again, having overcome her dependency through the adoption of non-narcotic pain treatment therapies. Her story was featured in a radio documentary which aired on CBC Radio One's morning program The Current on February 3, 2010. Since then she has performed numerous shows across Canada, touring with Ryan MacGrath.

We last presented Laura - with Susan Crowe and Raylene Rankin - at Cap a few years ago, and it has been almost 20 years since she last played a solo gig at The Rogue. We are thrilled to have her back!