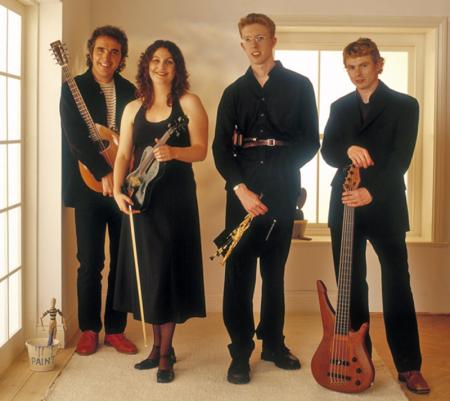 Born to a coal mining family with Irish roots, Jez Lowe was raised in an area close to the English/Scottish border where coal mining was the dominant occupation, and the stories and characters of the region have shaped his work for many years. He is a remarkable songsmith using wit, warmth, sensitivity, and keen perception, to paint colourful portraits of ordinary people with ordinary lives who, through Jez's eyes and verse become universal characters. Jez returns to the Rogue with his band, The Bad Pennies, returning to Canada on the way home from their latest tour of Australia.

On fiddle and duet vocals is Kate Bramley, from York. With her distinctive voice and relaxed fiddle style she has been touring with the band for six years. Champion piper Andy May from Gateshead plays Northumbrian Pipes, whistles, piano and accordion. The newest addition to the band is David de la Haye on bass. He is one of the best players on the Newcastle scene and tours internationally with Shona Mooney, winner of the BBC Young Tradition Award 2005.