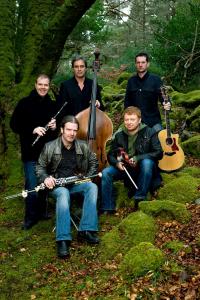 Lúnasa's musicianship is awesome... I'd sell my soul to be able to play like that - MOJO

Lúnasa... have catapulted both themselves and the music onto another plane where creative juices (and not precious entanglements with the past) reign supreme. - THE IRISH TIMES (23/11/02)

Musical revolution rides in on the back of rhythm. Consider bebop's loosening of swing's 4/4 stranglehold; Elvis Presley's interjection of r&b swagger into hillbilly pop; the Beatles fusion of backbeat and songcraft. Similarly, rhythm - their ingenious application of it, and their clear mastery of it - has made Lúnasa the single most influential and innovative band performing Irish instrumental music today. What Lúnasa has accomplished in their now decade-plus career has deeper precedent in jazz and progressive bluegrass, and has made them entirely unique in Celtic circles. Simply put, Lúnasa welds the ancient soul of traditional instrumental Irish music to a new rhythmic framework, one which breaks down the barrier between soloist and accompanist and creates a dynamic polyphony that preserves the dignity of their sources while fiercely thrusting them into the modern age.

From day one, the double bass of Trevor Hutchinson has been the band's fulcrum. The presence of more young Irish bands featuring the double bass - a relative stranger to the genre - is testament to Hutchinson's commanding presence on the instrument and his ability to invent an integral role for it where once there was none. Previously with the Irish roots-rock band the Waterboys, Hutchinson first met original Lúnasa guitarist Donogh Hennessy in the band of accordionist Sharon Shannon - herself no stranger to innovation. Hennessy's peerless playing carried with it both drive and sensitivity, acting almost as a drummer, sympathetically stating the pulse while providing a shifting harmonic undercurrent around Hutchinson's monolithic lines. Paul Meehan replaced Donogh a few years back, and has now been replaced by Ed Boyd, a brilliant English guitarist previously seen here with the band Flook.

Sean Smyth, MD, is also an all-Ireland champion on fiddle and whistle. Along with Trevor, he's the only remaining founder-member of the band. Joining them after their first album was the inimitable flautist, whistle player, bodhran player, and central clown figure in the band, Kevin Crawford. Cillian Vallely, of the renowned Armagh family of traditional musicians, rounds out the band on uilleann pipes.

The most remarkable thing about Lunasa is that they are purely an instrumental band. No guest singers. No vocals at all. Yet their shows are totally mesmerizing from start to finish. Their musicianship is unparalleled and the chops and changes between tunes leave audiences at first breathless and then rising to their feet as one at the end of the medleys to roar out their applause.

Lunasa have released eight CDs to date, the latest being La Nua (2011) The last time they played here around Halloween Kevin Crawford found a child's Tiger costume in the green room, and tried to fit into it. It was several sizes too small, but he persevered, eventually having to be rescued by his bandmates as he lay pinioned on the floor, with his four limbs stuck, his back bent in a tortured limbo-dancer's pose, and the material refusing to give an inch. He did manage to fit the tiger's head on, though, and commenced the second set playing the flute through its mouth!

Expect plenty of laughter, and expect to be totally gobsmacked by these 5 incredible musicians!