Across the Borderline
Concert poster 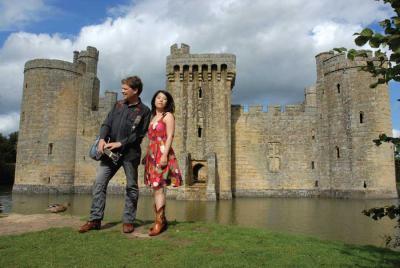 Across the Borderline is a musical partnership joining Austin songwriter BettySoo with Vancouver Island's Dobro master Doug Cox. Their second CD, More Lies, was released in April. It was truly recorded across borderlines: with Steve Dawson in Vancouver, on Vancouver Island by Doug Cox, and with Mark Hallman in Austin, Texas. As with Lie To Me, the duo's first album (released in late 2011, which was recorded at legendary Canadian folk icon David Essig's studio), More Lies was mixed and mastered by Austin's Mark Hallman. Both albums have already enjoyed success both with critics and fans. Here they are pictured outside an English castle on their latest tour of the U.K.

Musically, Dobro and string player Doug Cox covers the waterfront. From Blues to New Acoustic Music, World Music to Americana, Doug has collaborated with iconic British blues master Long John Baldry, India's musical royalty Vishwa Mohan Bhatt, guitar master Amos Garrett, Austrian Dub band Dubblestandart, American songwriter Chuck Brodsky, and African guitarist The Mighty Popo, to name a few. One doesn't find one's self in such esteemed musical company without some serious chops, and Doug's got those. Less often remarked upon but every bit as important is the fact that Doug Cox has "big ears." And everybody's talking about Cox - newspapers including The Toronto Daily Star and The Boston Globe, music magazines including Folk Roots, Guitar Player, and Acoustic Guitar - and all kinds of other folks. Described as "brilliant," "stunning," "ground-breaking," "virtuoso," and "a musician's musician," it comes down the the same message: his journey is worth watching.