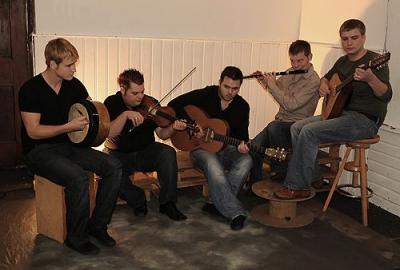 Great songs, great muscianship and, best of all, great enthusiasm. This outfit really enjoy their music and it shows. Audiences give an ecstatic response wherever they play. — Edinburgh Folk Club

Combining their love for traditional and folk music as well as original songs and tunes the Paul MacKenna Band have been plaing to audiences throughout the UK since 2006. With a contemporary approach to songs, although not straying too far from their roots, their arrangements are both fresh and innovative. Their exciting sound is created through outstanding vocals, driving guitar and bouzouki, intense fiddle playing a warm pairing of flute and whistles and dynamic bodhran and percussion.

Paul Mckenna is an outstanding singer and mult-instrumentalist from Glasgow whose own music draws from the rich traditions of Scottish and irish music and blends it with modern rock and contemporary song writing. David McNee is an exciting talent from Glasgow. A multi-instumentalist who favors a contemporary approach using traditional instruments such as mandolin and bouzouki to achieve a modern robust sound. Ruairidh Macmillan is the 2009 "BBC Radio Scotland Young Traditional Musician of the Year." Originally from Nairn in the Scottish Highlands Ruairidh is quickly making a name for himself in the world of Scottish Traditional fiddling. Having been taught by the legendary Aonghas Grant snr he graduated with honors with a BA in Scottish Music from the RSAMDin 2008. Sean Gray began his involvement in the folk and traditional music scene at the age of nine when he and his sister Robyn attended their first Folk Club. His final year of secondary school was spent at the National Centre of Excellence in Traditional Music at Plockton High School in the western Highlands, where he studied flute with Dougie Pincock and guitar with Jack Evans. Ewan Baird comes from a family long involved in the folk scene. He has only been playing bodhran for three years and in that time has developed a unique style of playing which is both impressive and the envy of many players. He also plays cajon and favors the DADGAD tuning for guitar and his style of playing adds to the unique sound of the Paul McKenna Band.

The band was voted Best Up & Coming Act at The Scots Trad Music Awards in 2009. We saw them in Memphis in February and were greatly impressed. We think you will be, too.