"MJB is one of my most favourite musicians on the scene today. His heartfelt original songs and soulful blend of blues and country sounds are the real deal." — Eric Bibb 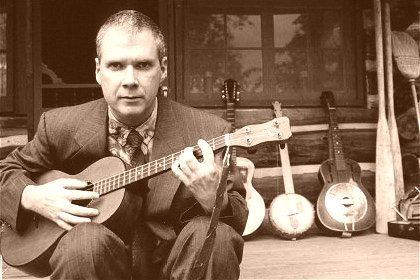 Renowned for his soulful, authentic performances of music derived from the American South, and for his encyclopedic knowledge of his chosen genres, Michael Jerome Browne has earned three Juno nominations for three distinctly different recording projects: one acoustic blues, one country blues and one old-time.

Now Browne is turning his attention to yet another facet of Americana with This Beautiful Mess, a toast to the bluesy mix of soul and country that flourished in the 1950s and 60s - the style of music captured on recordings by artists like Charlie Rich, Ray Charles and Solomon Burke. Like all of the musical forms from the region, it revels in the interplay of black and white influences that shaped the south's musical geography – one where 50s and 60s country and R&B artists listened to one another, played together and were inspired by each other.

This Beautiful Mess is Browne's most ambitious recording yet, not only because of the size of the band involved but also because it's his first album built on original compositions. And it's a testament to his song-writing partnership with life partner Bee Markus that the new songs are virtually indistinguishable from the classics. In an ironic twist, Markus is the lyricist of the duo, resulting in Browne singing several mournful numbers about his girlfriend's ex boyfriends. Yet he not only pulls it off convincingly, but the tracks - "Your Eyes Tell Me Goodbye" and "Low Tide Again" – are among the album's standouts.

Born in South Bend, Indiana in 1960, Michael Jerome Browne is the son of English professors whose love of music and poetry inspired them to take their nine-year-old son to the great jazz, blues and folk clubs in their adopted home of Montreal. It was there that Browne first heard the likes of Sonny Terry, Brownie McGhee and Lightnin' Hopkins. By the age of fourteen he was performing professionally on the seventies coffeehouse scene, playing guitar, banjo and harmonica and singing.

Today, Michael Jerome Browne tours frequently in Canada, the U.K., Australia, Europe and the United States. He's performed at Carnegie Hall with Kate and Anna McGarrigle, in the studio with Taj Mahal and Eric Bibb, and on tour with Guy Davis. He's been honoured with a Maple Blues Award for Acoustic Artist of the Year and a Real Blues magazine award for Best Acoustic Blues Artist. Sing Out magazine calls him "one of today's most accomplished interpreters of traditional musical styles."