Two CD launches in one show! Corbin Murdoch's band release Wartime Lovesongs on Jericho Beach Music and Leah Abramson (Dyad, Crooked Jades) releases a CD with her newest band, The Abramson Singers. The show will open with a set by a brass quintet, who will join The Nautical Miles later on as well. 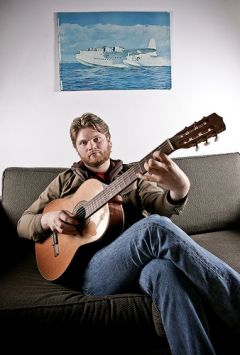 Corbin Murdoch and the Nautical Miles are an adventurous four-piece folk-roots band from East Vancouver. Murdoch began writing songs for the project in 2003 while completing his degree in creative writing and environmental studies at York University in Toronto, and pining for his west coast home. The Nautical Miles were recruited by mail correspondence, and formed during a summer back home. In their five years together, they have built a repertoire of richly textured and emotionally complex folk music. Their songs tell stories steeped in the natural and emotional histories of the Pacific-Northwest. Migratory mammals, people who swim across oceans, and long-forgotten revolutionary figures all become subjects in the narratives The Nautical Miles spin.

Their first full-length record, Tell me again how this place got its name was released in 2006 with critics remarking on the quality of the writing - "This is writing that comes from the pen of someone who knows his craft" - and the lush, intricate arrangements - "Music that rolls like the prairie hills, rises like the rocky coastline and swells like the ocean waves." The album was named one of the top ten albums of 2007 by Eden Monroe, music editor at Edmonton's VUE Weekly.

Since its release, the band has toured across the country, showcased at Canadian Country Music Week and The Western Canadian Music Awards, and Murdoch has toured solo in the UK, Sweden, Denmark and Poland, including a stop at the legendary Isle of Wight Festival.

Now, in 2009, the band is releasing their most ambitious project to date. Wartime Lovesong, their third release, is a song cycle of generational proportions. The album, much of which is arranged for brass quintet, traces the trials of a generation desperately seeking a purpose in an uncertain world. At once politically charged and deeply personal, The Nautical Miles have once again created a dynamic and moving document of their explorations as an ensemble.