Tim Readman & Out Of The Green 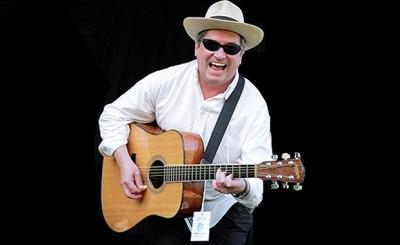 His strong personal voice, with commitments to themes of importance, speaks in the same vein as James Keelaghan and David Francey, while Tim's sense of humour stands comparison with that of The Arrogant Worms. - Canadian Folk Music Bulletin, Canada

Vancouver's Tim Readman is a musician, folksinger, songwriter, producer and music journalist, originally from Newcastle upon Tyne, England. He is the former leader of Canadian Celtic/folk favourites Fear of Drinking and was the Artistic Director for the 2008 and 2009 CelticFest Vancouver and is still with them as performer, musical host and MC.

A decade after Into the Red, Tim Readman's last release under his own name, comes this collection of six traditional and four contemporary folk songs from England, Ireland and Scotland. Out of the Green came out of the blue really. After ten years of thinking about songs to record, it took ten minutes to make up my mind, ten days to record it all and ten weeks to get the record out!

It all started at a gig with Jennie Bice. She threw a set list down and I said 'Yes that looks good-where did it come from?' She said 'I have had it for fourteen years since our first gig together'. Bloody hell I thought - it is time we recorded this stuff! I had been trying in my head to mix my own songs with folk material and also include some pop and rock songs I like to play in a folk style and it just wasn't working. I still have a load of originals and other songs ready to record but that'll all have to wait until another time. In the meantime I wanted Out of the Green to hold together as a solid body of work. We hope you agree that it has been worth the wait.

Tim will be playing all the songs from the CD as well as some favourites from the past. The CD launch will include all of the musicians who played on the CD: