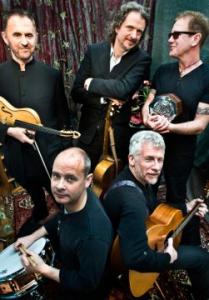 In July 1987 they played the folk festival, but only managed 7 songs all weekend. However, they made a big splash, so we invited them to play at The Savoy on the following Monday. They were amazing! In 1990 they played the WISE Hall. It was very loud and the place was packed. A neighbour complained that her floor was shaking. She lived on the opposite side of Victoria Drive, too. The band joked that they usually charge extra for that! They played Richards On Richards a few years back. Disastrous turn out. Magnificent show. In the years following they released their best three CDs to date (imho) - Here I Stand, Rise Up, and Meet You There. They returned to the Rogue in April 2008 and played a stranding-room-only show at St. James Hall, showcasing their more acoustic sound. Early last year they released The Oxford Girl & Other Stories, a wonderful collection of some of their classic songs re-recorded in a more acoustic vein. What a stunning album that is, but I think it may only be available through their web site.

John Jones' voice keeps getting richer and better with every passing year and album. Indeed, he released a very fine solo CD last year, Rising Road, which is also available from their website. Alan Prosser's guitar playing and Chopper's cello and bass provide such sumptuous accompaniment, and Ian Telfer's fiddle playing and compositional skills are always a highlight. Currently in the drummer's seat is Dil Davies.

Last Summer they came through town again, but it was in the heat of mid August and they surprised us by playing their electrifying electric set. It was a bit warm in the hall that night!

With the latest tour in support of The Oxford Girl ("NOT a "Best Of...", and it's NOT a systematic retrospective. It's a set of all-new acoustic recordings to mark Oysterband's 30th anniversary: 14 classic songs from all periods of the band's history, re-imagined and re-arranged for now.") we anticipate - and will request - a return to the more stripped down sound which is more suited to our venue. Lately they have been working once again with June Tabor, that diva of English folk song who fronted the band way back in the early 1990s in a show we presented at the old 86 St Music Hall. She wore leather and chain mail, and her rendition of White Rabbit would have even put Jefferson Airplane to shame! Wouldn't it be great if they brought her along, too?

Their song When I'm Up I Can't Get Down was covered by Great Big Sea a few years ago. It was a breakthrough hit for both bands. The Oysters are very excited that they have just been asked to release the song for use in the closing ceremony of the Winter Olympics. They jumped at the chance. Don't miss this chance to see England's finest!

Oysterband have always done things their way. From a time when Folk music was seen as one the uncoolest things around (apparently some people still think it is?!...?), they have followed their deeprooted love of the traditional music of Britain while combining it with all kinds of influences, pointed social commentary and exceptional musicianship. They are a diverse mix of unlikely and eclectic musicians who share a common goal of creating good music. And just to prove that hard work and integrity DOES pay off - today we consider them leaders - and legends - of the folk rock scene...

Much of what defines Oysterband is its diversity - you can't pin it down as either folk, rock or traditional. The current members between them have dabbled in art rock, punk, African music and jive and play or have played guitar, bass, cello, fiddle, squeezebox, mandolin, banjo, bowed psaltery, bones, bandura, guitar synths, sitar, trumpet, banjomandolin, concertina and piano. They meld modern influences with traditional music, and sing ballads, toe-tapping melodies and pub-brawling anthems. Their songs have been covered by countless bands, including Great Big Sea who recorded one of Oysterband's most recognizable songs, When I'm Up I Can't Get Down, which helped put The Canadian band on the map. They have also combined forces with such luminaries as June Tabor and Chumbawamba.