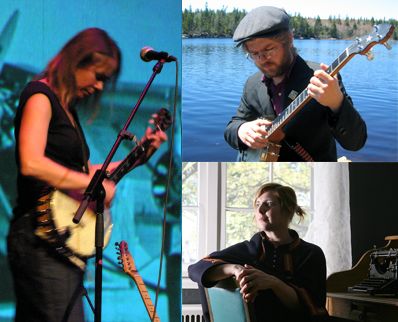 Some of the country's most innovative musicians have assembled to create a beautiful odd-sorts stew of sweet frailing banjos, guitars, piano, a string section, warm harmonies, and great, great songs.

Kim Barlow, Christine Fellows, and Old Man Luedecke are cherished Canadian artists who span a wide geography as well as lyrical subject matter and musical styles. They will share the stage with accompanists on violin, cello and percussion, backing each other up through two roundrobin sets of brilliant, shimmering arrangements of original songs.

Touring collaborations are a timehonoured tradition, harkening to such auspicious creative convergences as the Rolling Thunder Revue. Though the music industry is by its nature competitive, artists thrive when they find opportunities to come together in song or studio, at festivals, or even brainstorming ideas from opposite ends of the country.

Throughout this 17 date tour, as the musicians in the ensemble absorb each others' songs and styles, the show will embody the creative process of songwriting and the community that feeds these artists' creative fires.

Kim Barlow is a Juno-nominated folk/roots songwriter from Whitehorse, Yukon. She has toured her four albums from Inuvik to the UK; and from Yackandandah, Australia, to the Vancouver Folk Music Festival. Her latest recording, Champ, is sparse and humble, balanced by warm harmonies and the low, dark folk-pop brew of Barlow on banjo and guitar, along with collaborator and co-producer Jordy Walker, who will enrich the PanCan Ensemble's sounds on tour.

"Barlow...picks her targets/subjects as- tutely and dresses them up simply and austerely yet with a little playfulness and humour." — The Province

Winnipeg's Christine Fellows is an accomplished songwriter, composer and collaborator. With four albums under her belt, Fellows' most recent offering, Nevertheless, was hailed with four-star reviews across the board from Spin, Bust and The Globe & Mail. Her repertoire and arrangements move seamlessly from stark minimalism to dreamy orchestras of piano and strings; from vocal choir to vivid storytelling; from back-porch folk music to rattle-trap rock and roll.

Old Man Luedecke is a gifted storyteller who hails from Chester, NS. His songs are melodic gems, rich with hopeful goodness, his banjo-picking sweet and spare. He has supported such acts as Feist, The Be Good Tanyas, Corb Lund, and Joel Plaskett at both club shows and soft-seat venues. He has appeared on festival stages with the likes of Kris Kristofferson, David Francey, The Carolina Chocolate Drops, Jill Barber and Buck 65. His most recent album, Proof of Love, is destined to become a classic.