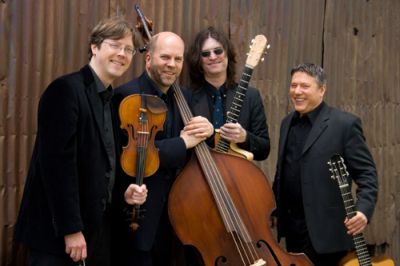 Van Django is an acoustic string ensemble whose music is well-rooted in the gypsy jazz of 1930's Paris, but beyond that it's all flights of dazzling fancy, driving rhythms and boundless creativity. The quartet was formed in 1998 and is made up of four of Canada's most talented and eclectic musicians- violinist Cameron Wilson, guitarist Budge Schachte, guitarist/cellist Finn Manniche and bassist Laurence Mollerup. The members have collectively played on over 30 feature film soundtracks as well as collaborations with well known Canadian and international music artists. They have been featured regularly on CBC radio and released their debut CD Tiptoe Trip in 2006. The group recently recorded their 2nd CD for release by the end of summer 2009. 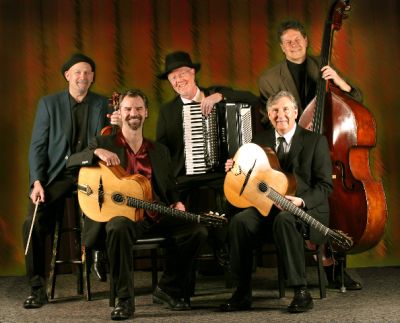 The focus of Pearl Django (Neil Andersson, Guitar; Ryan Hoffman, Guitar; David Lange, Accordion; Michael Gray, Violin; Rick Leppanen, Bass) is to blend the music of Django Reinhardt and Stephane Grappelli with American swing music. An interview on NPR's All Things Considered in 2001 brought the group to national attention, and in June 2002, they performed at the prestigious Festival Django Reinhardt in Samois sur Seine, just outside of Paris.

Voted favourite area jazz band 2003, by Seattle Weekly readers: "Pearl Django play(s) gypsy jazz...and they do it with such verve, skill and pleasure that they're pretty much irresistible to jazz and non-jazz listeners alike."