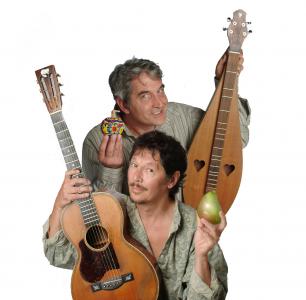 Pied Pear received a standing ovation playing in the rain on the very first night of the very first Vancouver Folk Music Festival. Thirty-five years later they think it's time to dust off those old tunes and play them one more time.

Rick Scott and Joe Mock pioneered indie roots music 1974-76 with Shari Ulrich in the trio Pied Pumkin. When Shari left to join the Hometown Band, the Pumkin became PIED PEAR. Rick and Joe toured far and wide playing concerts, dances and festivals. For six years they made folks laugh, cry, dance and sing along. They released three albums.They represented Canada at the 1982 Knoxville Worlds' Fair. Then they each went on to explore other creative interests: Joe to make music in Japan and France, and Rick to nine countries as an actor, singer/songwriter and acclaimed family entertainer.

They've always wanted to get back to playing the vast Pear repertoire and this spring Joe will travel all the way from France to do just that. They've chosen 15 intimate venues for a once in a lifetime tour starting March 25 on Rick's home Protection Island and culminating April 18 at the Rogue Folk Club in Vancouver, in Kitsilano, the Pear's old stomping ground. Don't miss this once in a lifetime chance to see two icons of Canadian folk music whoop it up in your local "living" room. Full tour details at www.piedpumkin.com.

A PIED PEAR 2011 Collector Edition CD combining two albums previously only available on vinyl will be released in conjunction with the tour, available at shows and from www.rickscott.ca and www.piedpumkin.com.

One of the most interesting, unique and complete performances to hit Edmonton in a long while. . .mode and music come together in a very rare mixture, carrying the listener away in an almost hypnotic flow.

The VANCOUVER SUN joyful without being intoxicating, intelligent without being intellectual. . .thoughtful arrangements of instruments and voices . . .and an explosion of humor and personality