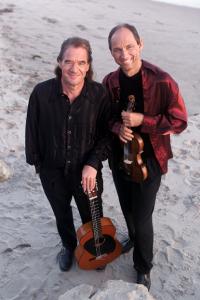 ...good music, wonderful music, tight and wild all at the same time. ...where the passion lives, where the blood runs hot and fast...

In terms of pure musicianship, the two mutually and individually have something almost magical going!

Willie Royal was born in El Paso, Texas, as the son of an Air Force lieutenant colonel, and was raised in such exotic locales as Turkey, Germany, France, and Florida. He began his classical violin lessons at the age of eight, and became so proficient that he became concertmaster of his high school orchestra. Inspired by rock 'n' roll - as well as the violin-fueled fusion of Jean-Luc Ponty, Stephane Grappelli, and It's A Beautiful Day - Royal rebelled against his formal training and started playing country-rock fiddle in a popular Florida-based band, while occasionally sitting in with Gregg Allman and Dickey Betts of the legendary Allman Brothers Band. Willie continued to absorb diverse musical styles - reggae, jazz, salsa - and soon set out on the road, playing in Europe, Canada, Brazil, and New Zealand, before settling in sunny Mexico in the early '80s.

Wolfgang "Lobo" Fink was born in the tiny Bavarian village of Teisendorf, halfway around the world from his musical partner. The 18-year-old Lobo first picked up his chosen instrument while serving as a signalman in the German navy. After hearing an album by gypsy guitarist Manitas de Plata, the young mariner discovered his affinity for the romantic, rhythmic music. After completing his term of service, he searched out de Plata, ultimately finding the guitarist residing in a gypsy camp in Southern France. Lobo spent a year with de Plata and his people, hanging out and absorbing the music. Upon his return to Germany, Lobo formed Lailo, a flamenco group which toured Europe for three years and did much to popularize the modern gypsy sound. Longing for new ways to express himself, Lobo journeyed to the famous caves of Sacromonte in Grenada, Spain, to spend a year living and studying with the gypsies. In 1980, he headed to Mexico and began working as a solo act.

Willie and Lobo's first fateful meeting came in 1983, when the two musicians were both working at Mamma Mia's restaurant in the colonial town of San Miguel de Allende in Mexico. Willie was playing fiddle with a local salsa combo, while Lobo played solo flamenco guitar on the patio. Though they jammed occasionally, Willie and Lobo were still searching for their individual sound, recording a number of solo albums before finally uniting in 1990 in Puerto Vallarta. Together they made 10 albums and toured across the world.

After 17 years they went their separate ways with a farewell tour that brought them to The Rogue in 2007. We knew it couldn't last! They are back on the road, with a new CD, and a short tour of some of their favourite haunts out here in the wild west! Come and be entranced, seduced, and compelled to groove once again to the inimitable sounds of the surfin' dudes who play flamenco / gypsy fiddle like nobody else on earth (or salt water)!