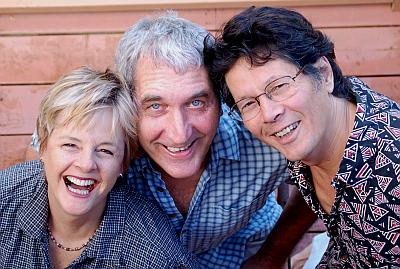 On May 9th, we celebrate 21 Years Of Roguery with our Birthday Party Concert at St. James Hall, at 8pm. By strange coincidence Pied Pumkin commence a 34 date tour of BC and Alberta that very night, so for the 2nd year running, they will be the performing guests of honour at the Rogue Birthday Bash. Rick Scott (vocals, dulcimer), Shari Ulrich (vocals, piano, mandolin, fiddle, flute) and Joe Mock (vocals, guitar, piano) have been making music - and making music history - for slightly longer: 35 years, in fact. The trio that pretty much invented the Home Recording industry on the Left Coast became darlings of the college crowd in the 70s. Circumstances led them on separate musical journeys for a while, but happily they reunited 20 years ago at the folk festival and we were thrilled to hear that they still had that special brand of magic. They unearthed a cassette of lost recordings that year - The Lost Squash Tapes - and had so much fun that they decided to make reunions a regular thing. A compendium CD - Plucking Devine - was issued in 1997, followed by Pied Alive - a triumphant live recording of some of their BC dates in 1999. Last year they issued a Children's Album, Pumkids, which won several awards for best Canadian Kids Album of the year.

On this occasion they will probably concentrate on their very danceable, highly musical, music for grown-ups and those of who refuse to grow out of our love of musical mayhem! Their music blends folk, soul, celtic, blues, and even klezmer influences into a fun-filled package of glorious harmonies, fine picking, lots of grinning - and a fair bit of gurning (that's an obscure art form based on facial contortions, by the way.) The Lotus Eaters Blues band, the lost soul singers of the rain forest, mushroom madrigal mayhem with strings. Pied Pumkin celebrate 34 years of decidedly orange-tinted folk music with a 34 date tour of BC., and they start the tour right here!

The evening commences with our Annual General Meeting, where members are asked to come and vote for the new slate of directors and review our Annual Report. If you are a member, please come to the AGM and stay for the show - and the cake! If you need to renew or sign up first, come early. Sign-ups start at 6:30pm. The meeting runs from 6:45pm.

N.B. Whilst the AGM is only open to members, the party is open to everyone.