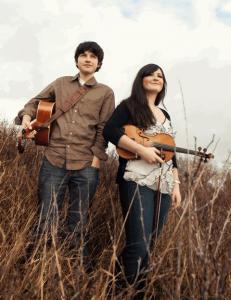 We kick off the Rogue's 24th Anniversary Weekend with a CD launch for the prodigiously talented Victoria duo Qristina and Quinn Bachand. Many of you will have seen Quinn accompanying Ashley MacIsaac at the 2009 Vancouver Celticfest. Quinn was only 12 years old then! Last summer he was Ashley's accompanist at the Edmonton Folk Festival, and more recently Quinn played with Oliver Swain's Big Machine at Oli's CD launch at The Rogue in February. He made a huge impression on the audience that night! Without doubt he is one of Canada's finest guitar accompanists - especially in Celtic music, but apparently his skills range far beyond Celtic and into Gypsy Jazz amongst other genres. Quinn's slightly older sister Qristina is a very fine fiddle player and composer. Together they have now released two CDs, Relative Minors (2008) and the brand new CD, Family, which was produced by Adrian Dolan.

This young brother and sister duo from Victoria, BC, Canada are quickly carving out a name for themselves in the world of Celtic music. Twenty year old Qristina Bachand is an expressive fiddler, with a unique personal style that is bold and edgy. Though strongly rooted in the Celtic tradition, her versatility and interests also include Old-Time, Appalachian, Swing and contemporary folk music. Fourteen year old, Quinn Bachand, is gaining recognition as one of the best Celtic guitar accompanists in the world (Ashley MacIsaac). Quinn adds a contemporary edge to traditional Celtic music; his hard-driving strumming, inventive chord voicing and powerful rhythmic effects make even the most well-worn tunes seem new and exciting.

Together, Qristina & Quinn Bachand create music that is challenging yet energetic, refreshing and fun. Their 2008 debut CD, Relative Minors garnered much attention and received a prestigious 2009 Canadian Folk Music Awards Nomination. 'Relative Minors' is a nod to the rich canon of music that has influenced their young careers (Penguin Eggs Magazine).

Family features a wonderful selection of Irish tunes in scintillating medleys. What I find especially intriguing is when they enter the realm of old-time music, which sees Quinn switch to 5 string banjo and Qristina sings as well as playing some scorchingly hot fiddle. Then there's a beautiful tune, "Lonesome Eyes," written by the late Cape Breton fiddler Jerry Holland for his son Jerry Junior. There's also a lovely song written by Scots duo Mairi Campbell and Dave Francis, but it's the selection of reels and jigs that are the focal point of the new CD. Yet again Quinn amazes with some formidable tenor banjo on "Lark In The Morning," and Qristina's sparkling fiddle playing shines throughout. Other highlights include "Music For A Found Harmonium" (the theme music for The Edge on Folk since 1989), and some cleverly "tweaked" tunes: reels into jigs, especially.

Qristina & Quinn have performed across Canada, the US and in Europe at major concerts and international music festivals. They have opened and played with many well-known musicians including Ashley MacIsaac, Battlefield Band, Lau, Lunasa, Liz Carroll & John Doyle, Buddy McMaster, Daniel Lapp, Tony McManus & Robin Nolan to name but a few. They play traditional music for the 21st century, always mindful of its origins but fresh and exciting in its ambition and delivery. There have been quite a few West Coast Celtic bands over the past 25 years or so, but few have managed to stay so close to the tradition whilst also investing the material with such boundless energy and invention. This will be a special night!

Update: Qristina and Quinn will be bringing along an amazing band which includes: Bryan Skinner on bodhran & vocals, Zac Leger on Uelliann pipes, bouzouki, flute, whistle & vocals, and Adrian Dolan on accordion & mandola.