"Brings sunlight into your heart and sets your feet a-dancing."
The Munster Express, Ireland 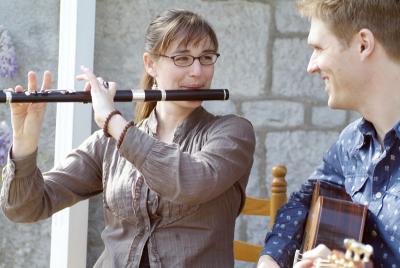 In the Fall of 2005, Vancouver singer and flute player Norah Rendell (Cleia and The Maenads) and Minneapolis / St. Paul guitarist Brian Miller found themselves both living in Ireland in search of a deeper understanding of the traditional Irish music they had fallen in love with back home. Their first concerts as a duo were a hit with the Irish. Now based in the Twin Cities, Norah and Brian have launched a debut album of gorgeous traditional and contemporary folk songs and driving Irish dance tunes, Wait There Pretty One.

Norah Rendell sings and plays Irish flute and whistle "with a degree of style and sensitivity envied by many" says Tim Carroll of FolkWords. In Canada, Norah has performed live on the CBC and at the Mission Folk Festival, the Rogue Folk Club and venues throughout British Columbia and Alberta as a founding member of Canadian roots band Cleia. In 2005, Norah was awarded a grant from the Canada Council for Performing Arts to study traditional flute and singing in Ireland. She kept busy, earning an MA in Irish traditional music from the Irish World Academy of Music and Dance in between island hopping excursions to such venues as the Edinburgh Fringe Festival and Sidmouth Folk Festival with the UK/Ireland-based band The Outside Track. Since relocating to Minneapolis, Norah has joined the ultratraditional Doon Ceili Band led by County Offaly's Paddy O'Brien.

Esteemed Irish music critic Earle Hitchner writes that "the backing of [Brian] Miller on guitar flexes not just muscle but a fully complementary style." Also an accomplished singer and flute player, Miller began playing Irish music as a high-schooler in Bemidji, Minnesota. He has been a highly visible character in the Twin Cities Irish music scene since 1998, while often sneaking away to his other adopted home of Cork, Ireland. As a member of a number of groups and duos including The Tommie Cunniffe Trio, Gan Bua, The Doon Ceili Band, 5 Mile Chase and Laura and the Lads, Miller has performed throughout the US, Canada and Ireland. In Ireland he has been featured on TG4, RTE television and RTE radio. The Irish Times called his guitar accompaniment on Tommie Cunniffe's 2007 solo album "superb".

Brian and Norah will be joined by irrepressibly dynamic Portland fiddler, Django Amerson - the other member of 5 Mile Chase.