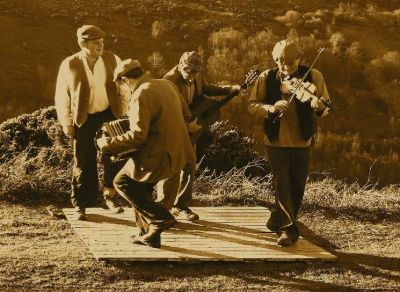 Playing together since 1992, Rattle the Boards have been praised as one of the best traditional acts in Ireland's music scene. Pat, John and Benny were all members of the Knocknagow Ceili Band who were based in Clonmel, Co. Tipperary and spent many years playing for dancers throughout Ireland. Benny is also leader of the International supergroup Danu, and has toured all over the world. In 1999 Rattle the Boards released their debut album to much acclaim. With many performances in Ireland and Europe over the past few years they have grown into an act very much sought after. In 2002 Rattle the Boards provided the musical inspiration for a major Irish theatre show called Teac A Bloc by famous visual artist Des Dillon. Rattle the Boards arranged and performed with Teac A Bloc to sold-out venues throughout Ireland and also performed two sketches from the show on Ireland's premier tv program, "The Late Late Show."

Last spring they released their long awaited 2nd CD The Parish Platform. Their sense of fun and the lift in the music makes them unique among their contempories. As their name suggests this is a group that will have its audience on their feet and dancing in no time!

Playing since he was 13 years old, Benny McCarthy is one of Ireland's best young melodeon / button accordion players. His playing is described as powerful and soulful. He comes from Co. Waterford in the sunny south east of Ireland, and founded Danu in 1995.

Pat Ryan (fiddle, mandolin, banjo) comes from a great musical family and has played since he was very young. He first learnt music from his father Jack Ryan who was a notable fiddler with the Knocknagow Ceili Band. His first instrument was the harmonica and now he is accomplished on many instruments . Pat comes from Clonmel in Co. Tipperary.

John Nugent has played guitar since his youth. Like a lot of guitarists he has a strong background in rock and popular music. His love for Irish music began when he met Pat Ryan. John, from Newcastle in Co. Tipperary, has mastered the art of tasteful accompaniment.

John T. Egan (vocals) comes from a musical family and has been singing since he was very young. He has many influences including the Irish greats such as Luke Kelly, Liam Clancy & Christy Moore. John T. is also a keen gaelic sportsman which all adds to his great love of all traditions of Ireland. He also comes from Newcastle, Co. Tipperary.

This concert will also feature a special guest appearance by fiddler / singer Lissa Schneckenburger from Vermont. Lissa last played here a couple of years ago, and has a great new CD out since then. She'll perform the opening set with Bethany Waickman on guitar, playing traditional songs from "the Old Sod" - New England style - and hot original and traditional fiddle tunes.