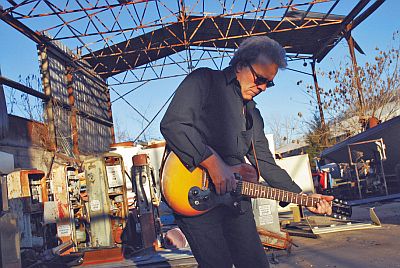 Although he has toured all over the world, sharing the bill with such luminaries as B.B. King, Muddy Waters, J.J. Cale and Robert Cray, Ray Bonneville became known in the U.S. a few years ago, when he released Roll It Down, his first CD on a U.S. label. Goin' By Feel is a power-packed album whose smoky groove-laden tracks include crowd favourites What Katy Did, Carry the Fallen and I Am the Big Easy, his powerful tribute to the resilience of New Orleans, where Bonneville lived for half a decade. Although this well-travelled musician has spent time in many places, including Boston, Colorado, Alaska, Montreal, Seattle and Paris, France, it is New Orleans that Ray cites as the city most influential to his unique musical style.

Bonneville says, "New Orleans is where I learned to take my time, to allow space between the notes so the songs could truly groove. You learn that solid rhythm is like a tightrope on which the notes can do their dance."

For his highly percussive electric guitar sound, Ray uses his index finger, his thumb, the back end of his hand, sometimes a slide, and a Fender tube amp. His weathered, story-telling vocals are recognizable anywhere, and his intricate but understated rack harmonica playing comes right from the gut. To add another layer of rhythm, Bonneville brings his foot down on an amplified piece of plywood on the floor. The result is a big sound with an almost primitive quality and a lot of forward momentum. It's visceral, bluesy, and aimed at the belt. Combining the best of blues, folk and Americana, Ray's grooves hypnotize and don't let go. This year he wowed the music industry with his bring-down-the-house performances at South By Southwest and the Folk Alliance.