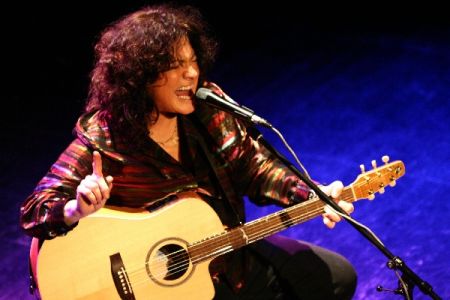 Dubbed the goddess of Canadian blues by CBC's Shelagh Rogers, Rita Chiarelli has, "a voice that can growl at her demons or soar with the angels, a gift for lyric, an ear for melody and the heart to combine them." She is an accomplished singer-songwriter, a gifted vocalist and a skilled musician. Add to that a warm persona and a fine sense of humour and you have all the ingredients for an outstanding performer.

As Ronnie Hawkins (with whom she toured in the early days) noted... "once in a lifetime you hear a voice so blue it makes the angels weep.. that voice is Rita Chiarelli." Beyond the blues arena, Chiarelli creates her own unique sound that is a blend of musical influences. Her songs shimmer with blues based rock undertones, jazz riffs, Cajun and country tinged melodies blended with a folk-roots flavour. Few can match the wide range of Chiarelli's vocal stylings and the consistently solid lyrics she pens. Rita Chiarelli is a gifted storyteller, lyricist and master of poetic imagery.

Rita has a JUNO win and four nominations, and has won multiple Maple Blues Awards, Canadian Folk Music, and Toronto Independent Music awards. She is an honorary lifetime member of The Manitoba Blues Society, and the 2002 recipient of CBC's Great Canadian Blues Award.

Cuore... the Italian Sessions won Rita the 2007 Canadian Folk Music Award for best solo World Music act. As CBC radio's Heather McLeod stated "I didn't understand a word, but my heart understood every note. This album rings with love and respect for Chiarelli's Italian heritage, and her skill as a singer and an artist. I couldn't bear to pry it out of my CD player."

Uptown Goes Downtown Tonight... Rita Chiarelli with the Thunder Bay Symphony Orchestra is Chiarelli's most ambitious recording project to date. Eleven of her songs were arranged and charted for the symphony, recorded in November 2007 & released in March 2008.

On this night she'll be joined by guitarist John King and bassist Joe "Giuseppe Piazza" Phillips.