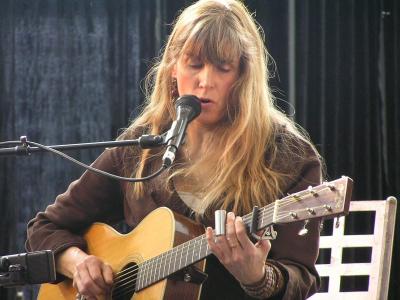 Heralded as a living landmark (Berkeley Express), a national treasure (Guitar Extra), and one of the greatest living acoustic blues artists (Blues Revue), Rory Block has committed her life and her career to preserving the Delta blues tradition and bringing it to life for 21st century audiences around the world. A traditionalist and an innovator at the same time, she wields a fiery and haunting guitar and vocal style that redefines the boundaries of acoustic blues and folk. The New York Times declared: Her playing is perfect, her singing otherworldly as she wrestles with ghosts, shadows and legends.

Born in Princeton, NJ, Aurora "Rory" Block grew up in Manhattan a family with Bohemian leanings. Her father owned a Greenwich Village sandal shop, where musicians like Bob Dylan, Maria Muldaur and John Sebastian all made occasional appearances. The rich and diverse Village scene was a constant influence on her cultural sensibilities. She was playing guitar by age ten, and by her early teens she was sitting in on the Sunday jam sessions in Washington Square Park.

During these years, her life was touched - and profoundly changed - by personal encounters with some of the earliest and most influential Delta blues masters of the 20th century. She made frequent visits to the Bronx, where she learned her first lessons in blues and gospel music from the Reverend Gary Davis. She swapped stories and guitar licks with seminal bluesman Son House, Robert Johnson's mentor (He kept asking, 'Where did she learn to play like this?'). She visited Skip James in the hospital after his cancer surgery. She traveled to Washington, DC, to visit with Mississippi John Hurt and absorb first-hand his technique and his creativity.

This period seemed to last forever, Block recalls nearly forty years later. I now realize how lucky I was to be there, in the right place at the right time. I thought everyone knew these incredible men, these blues geniuses who wrote the book. I later realized how fleeting it was, and how even more precious.

She has just released the latest in her series of tributes to her greatest influences and mentors: I Belong To That Band - A Tribute To Rev. Gary Davis (Stony Plain Records) - a brilliant follow-up to the wonderful Shake 'Em On Down (Mississippi Fred McDowell), Blues Walkin' Like A Man (Son House), and The Lady & Mr. Johnson (Robert Johnson). Earlier this year she published her autobiography, When A Woman Gets The Blues. It's a compelling read! Rory's concerts here are exceptionally rare (this will only be her 3rd Vancouver show in the last 25 years, by my reckoning!) so don't miss this chance to see one of the most gifted guitar players anywhere - and one of the most soulful singers in the Blues genre to boot.