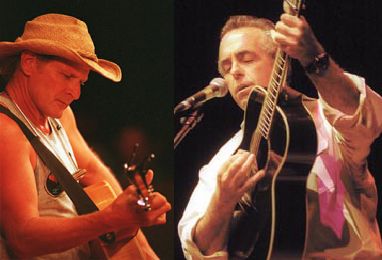 The last show on the "Roots on the Rails" tour features two legendary Texas singer-songwriters, Tom Russell and Butch Hancock. Songs of vivid imagery, fascinating characters and glimpses into the dark corners of society.

Tom Russell has recorded 25 records and one DVD. His songs have been recorded by Johnny Cash, Nancy Griffith, Joe Ely, Iris Dement, Ian Tyson, kd Lang, Suzy Bogguss, Ramblin Jack Elliott, and other great artists. He is credited, along with Dave Alvin, of inventing the Americana radio format with their Merle Haggard tribute Tulare Dust in 1994. The Columbus Other wrote: "Russell seems to have invented, and keeps re-inventing, American roots music...! He's the strongest live performer we have seen in years."

He has appeared on the David Letterman TV show four times in the last few years, and his songs have appeared in a dozen movies and television series including: Tremors, Songcatcher and Northern Exposure. Russell was born in Los Angeles in 1953 and now makes his home on a "badland farm" on the border of El Paso-Juarez. He graduated from the University of California with a Masters Degree in Criminology and taught school in Nigeria during the Biafran war, before relocating to Vancouver to begin his musical career singing Hank Williams songs in skid row bars.

He has published three books - a detective novel, a compendium of songwriting quotes with Sylvia Tyson and a book of letters with Charles Bukowski - and is also a celebrated painter. In 2007 Hightone Record released Wounded Heart of America, a collection of artists who have recorded Tom Russell songs - from Johnny Cash to Eliza Gilkyson. The record also includes Russell's version of his Who's Gonna Build Your Wall? which won the 2008 Folk Alliance 'Song of the Year'.

Legendary Texas songwriter Butch Hancock plays a dozen instruments and adds memorable riffs and fine arrangements which build an intriguing dimension and atmosphere around his always finely tuned lyrics. His voice, still scratchy and warm after all these years, weaves images of opposites, and pulls no punches as he questions all kinds of authority. A member of the Flatlanders - with Joe Ely & Jimmie Dale Gilmore - Butch's latest CD, War & Peace, is a tour de force, ranging from calls for peace to calls to electoral arms. Don't miss this rare chance to see Butch Hancock in Vancouver - at the height of his creative powers!