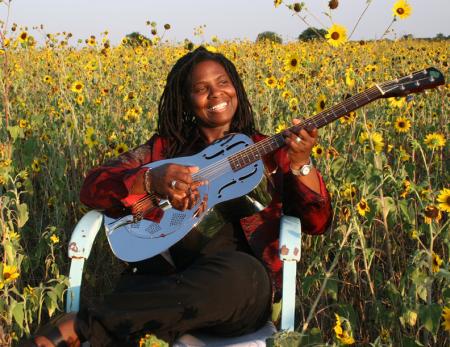 Celebrating a brand new release in the New Year, the phenomenal Ruthie Foster makes a triumphant return to our stage. Ruthie’s musical style is a remarkable hybrid of blues, gospel and plenty of soul with a voice that is utterly incomparable. She commands the stage like no other with her energetic and highly entertaining performances - feel the joy!

Ruthie Foster returns with a brand new recording, her fifth album. The Phenomenal Ruthie Foster, is a collection of soul stirring recordings featuring both self penned tunes and rich takes of songs by Lucinda Williams, Son House, Eric Bibb and Sister Rosetta Tharpe. Whether accompanied by frogs on Beaver Creek Blues, stomps and claps on Grinnin' In Your Face or her own coruscating Hammond B3 organ work, Foster brings you to your knees with what she calls her "spirit voice."

Since returning to her native Texas in the mid-'90s after a period of walkabout that found her touring with the U.S. Navy band Pride and even spending a few years in New York City under contract to Atlantic Records, Foster quickly established herself as one of the acoustic music world's brightest stars. From the Kerrville Folk Festival to Austin City Limits to stages all across North America and Europe, she was winning thousands of new fans a night and selling a staggering average of 100 CDs per show. At the Vancouver Folk Music Festival, she even broke Ani DiFranco's record by selling over 1,000 CDs in a single day. All those recordings carried considerable critical acclaim, too, especially her previous two, the Lloyd Maines-produced Runaway Soul and the live Stages. Both live and on disc, Foster mixes contemporary folk with oldschool gospel and blues with dazzling efficiency, showcasing a powerhouse voice that draws comparisons to the likes of Ella Fitzgerald and Aretha Franklin.

Ruthie Foster's songs contain elements of blues, gospel, country and folk that give colour and texture to her vocal work and fill those who hear her music with great joy. She will be accompanied by a full band this time, and if it's the line-up we saw in Austin last year, it will be the most amazing show she's presented here to date. Not to be missed!