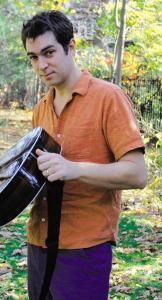 Ruth Moody is a Juno Award winning songwriter from Winnipeg, Manitoba. Founding member of the internationally renowned, Billboard-charting trio The Wailin' Jennys and former lead singer of the Canadian roots band Scruj MacDuhk (the band that would later become The Duhks), she has performed in sold-out venues around the world, made numerous critically-acclaimed albums, and has appeared more than a dozen times on the national radio show A Prairie Home Companion.

Although best known for her work with The Wailin' Jennys, Ruth is an artist of exceptional depth and grace in her own right. Critics have lauded her ethereal vocals, impressive multi-instrumentalism (she plays guitar, banjo, accordion, piano, and bodhrán), and her talent as a songwriter. Writing with a maturity and wisdom that belies her age, her songs are timeless, universal, and exceptionally well-crafted, all sung with an intimacy and honesty that is unmistakably her own.

Now Ruth releases her highly-anticipated solo album The Garden. Although she released a solo EP in 2002 called Blue Muse, it is Ruth's first full-length recording. Coming out on Red House Records on April 20, 2010, the album was produced by Juno nominee David Travers-Smith and features an all-star cast including Kevin Breit (Norah Jones, k.d. lang), Luke Doucet, Crooked Still, and a guest appearance by The Wailin' Jennys.

Ruth - who plays guitar, banjo, accordion, and piano - will be accompanied this night by the fabulous Adrian Dolan of The Bills on fiddle, accordion and piano, and bass player Gilles Fournier.

There will also be an opening set by Black Hen recording artist Joey Wright, who releases his 3rd CD, Hatch, on November 10th. Like his previous two albums, Hatch features outstanding instrumentals and inspired arrangements. Unlike his other work, however, Hatch features eight new songs by Wright. Joey has been co-writing songs for years now with his partner Jenny Whiteley, but this is the first time we hear him handling the vocals on his own compositions. The songs on Hatch are lyrically dreamy and poetic, and melodically inventive and catchy. Joey is known for his lyrical and inspired guitar and mandolin playing, and is versed in many styles such as bluegrass, blues, swing, pop and country. He is also known for his unique compositions. He is a sought after collaborator as much for his positive and inspirational attitude as for his musical vision and talent. Joey will be joined by Jesse Zubot on fiddle, and Dan Whiteley and Christine Bougie on various guitars, mandolins, and other things with strings.

Joey Wright doesn't need a bio. You just hear about him. A rumour, a sound. Musical charisma enveloping a career of cinematic guitars, slides of blues and bluegrass. An inspired force of beauty and bravado, danger and charm. — Sarah Harmer