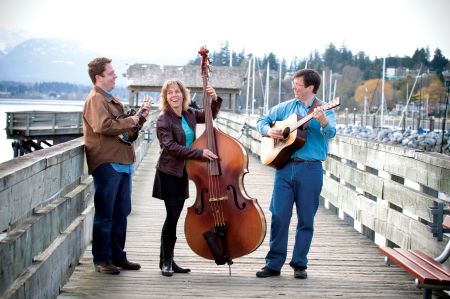 Roots music with the drive of bluegrass – that's the sound of Shearwater, a trio from Vancouver Island that blends fine duet harmonies with scorching picking. Dave Clarke (guitar), Tammy Fassaert (vocals, bass), & James Whittall (mandolin) have the traditional bluegrass "drive" firmly embedded in their sound, and Shearwater's groove takes on essences of country and folk, Celtic and Caribbean for a more varied and interesting musical journey.

While this dynamic trio's performances speak loudly of their commitment to bluegrass, Shearwater's groove pays homage to various acoustic styles, from country and bluegrass to celtic and folk, with even some caribbean flavour thrown for good measure!

Shearwater has been making waves since it first started performing on the folk and bluegrass circuit on the West Coast in late 2006, and its reputation is spreading with the release of the group's first album, "Shearwater", which features 12 songs that include originals by all three band members, along with covers of tunes by such diverse artists as Leonard Cohen and Is- land songwriter Gordon Carter. The album, a mix of songs and instrumentals, features a sound that one veteran music writer called "Island drive," referring to the group's laid-back acoustic sensibility and highly charged playing.

A mainstay of the west coast acoustic music scene, Tammy Fassaert is an accomplished singer, bassist and instructor who has performed with such bluegrass luminaries as Laurie Lewis, John Reischman, Sally Van Meter and Scott Nygaard. She grew up listening to her father playing baroque and Dixieland music on his trumpet, and her mother singing "pops" while hosting their frequent cocktail parties in the 1960s. How she ended up choosing country and bluegrass remains a mystery to her family. Her strong vocals have been de- scribed as "the sound of wood smoke and clear mountain streams."

Dave Clarke has been called "one of Canada's finest acoustic guitarists" by music critics. Catapulted into a lifelong passion for music during a Beatles concert in Montreal when he was 10, Dave settled on guitar as his instrument after hearing recordings by Robert Johnson and Mississippi John Hurt. His musical pedigree includes work with the Montreal folkgrass trio Steel Rail and Canadian folk singer-songwriter David Francey.

James Whittall is one of the most talented and enthusiastic young mandolin players in Canada. A bright light in the Victoria music scene, he brings scary intensity, remarkable tone, and boundless joy to traditional bluegrass and newgrass music.