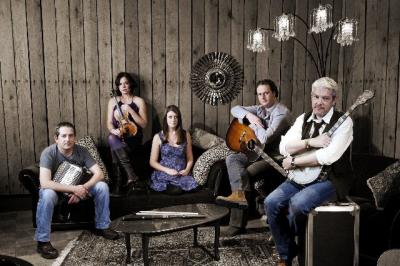 Since its birth in 1996, Solas has been loudly proclaimed as the most popular, influential, and exciting Celtic band to ever emerge from the United States. Even before the release of its first Shanachie CD, the Boston Herald trumpeted the quartet as the first truly great Irish band to arise from America, and the Irish Echo ranked Solas among the most exciting bands anywhere in the world. Since then, the praise has only grown louder. The Philadelphia Inquirer said they make mind-blowing Irish folk music, maybe the world's best. The New York Times praised their unbridled vitality, the Washington Post dubbed them one of the world's finest Celtic-folk ensembles and the Austin American-Statesman called them the standard by which contemporary Celtic groups are judged.

Solas is virtually unique in the new territory it has opened up for Celtic music. It has performed at all the major Celtic and folk festivals, including Philadelphia, Edmonton, the legendary National Folk Festival, and Milwaukee's Irish fest; but also at Telluride Bluegrass Festival, and the chamber music summer series at Steamboat Springs, Colorado. It has performed at Symphony Hall, Wolf Trap, the Ford Amphitheater, and Queens Hall in Edinburgh, Scotland. In New York City, where the band was based in its early years, it has played at the legendary Bottom Line folk club, but also at vaunted classical venues Town Hall and Symphony Space.

The Solas sound today is anchored by founders Seamus Egan, who plays flute, tenor banjo, mandolin, whistle, guitar and bodhran, and fiddler Winifred Horan. They are two of the most respected – and imitated – musicians anywhere in acoustic music. Mick McAuley from Kilkenny plays accordion and concertina; Eamon McElholm from Tyrone plays guitar and keyboards. Following in the footsteps of previous vocalists Karan Casey and Deirdre Scanlon comes Mairead Phelan from Kilkenny. She is not only a wonderful singer, but also an All-Ireland champion on flute and tin whistle, and an accomplished piano player. She takes time out from studying Medicine at Trinity College Dublin to tour with Solas!

Solas has emerged as the most exciting band in traditional Irish music. The Los Angeles Times says, Solas offers a compellingly original, strikingly contemporary view of traditional Celtic sounds. Although Solas can play undiluted traditional Irish music as well as anyone alive or departed, they are always varying the mix of fire-tested tradition and contemporary sensibility with an ease and naturalness that is as astonishing as their overwhelming musicianship. As a result, they transcend musical genres into the realm of pure musical expression that only a relative handful of musicians attain. The internationally acclaimed supergroup has not only captured the hearts and ears of Irish music fans, but fans all around the globe with their blend of Celtic traditional, folk and country melodies, bluesy sometimes jazz-inspired improvisations and global rhythms. Seamus Egan co-wrote "I Will Remember You" with Vancouver's Sarah McLachlan for the movie "The Brothers McMullen."

Solas has built a fanbase that includes the likes of Bela Fleck, Emmylou Harris and the much sought-after rap producer Timbaland who surprisingly sampled the band on his radio hit "All Yall." Their latest release is The Turning Tide. Like its predecessor, For Love & Laughter, it features Mairead Phelan on vocals with the latest line-up of the band, and is available on Compass Records.

Fifteen years and still going strong, this will be Solas' first concert in Vancouver for 5 years. Don't miss it!