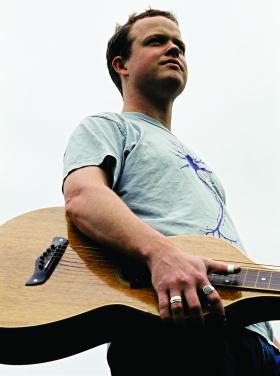 Acclaimed Vancouver musician / producer / songwriter Steve Dawson will release 2 new albums of his work in 2008; Waiting For The Lights To Come Up and Telescope.

"With musicians of this caliber, I knew that most of the magic would be happening quickly on early takes, even before the band was too comfortable with the new material."

While Steve's hypnotic fingerstyle guitar is still at the heart of the new material, it's the songs that are most prevalent on this recording. Drawing from his wealth of experience with blues, jazz, rock, old-school gospel and folk music of all kinds, Dawson creates a unique blend of sophisticated roots music as only he can. Polished, but leaving the edges a little rough. Contemporary, yet utilizing sounds and instruments that could have been recorded 60 years ago. The evocative lyrics and textural guitars paint an unforgettable picture in songs like Room To Room and Dry As Our Luck, the twang of the baritone guitar underlies the foreboding At Arms Length, and Steve picked up his old $50 Silvertone guitar for the searing slide that takes us on a chaotic trip in Fire Somewhere.

Dawson continues to explore the traditional side as well, always with a contemporary flair, or something to pull it slightly off in a new direction. He dusts off the Mississippi Sheiks' Somebody's Got To Help You and burns it down with the band in tow. Hard To Get Gertie and Swinging In A Hammock offer a take on vintage Hawaiian music, although the addition of drums, pump organ, and several electric guitars skew the context just enough. Dawson is channelling his many influences here, but he has found a unique voice within it all that has truly begun to surface.

"An uncommonly gifted finger-picker and slide player, Vancouver's Dawson could probably drop a guitar on your big toe, and you'd thank him because it sounded so good." — The Globe And Mail (National)

The new CD arrived at Rogue Towers at the end of January, and it's in heavy rotation on my CD players and on The Edge On Folk. There are two things you can guarantee about a Steve Dawson show: spellbinding music, and, in the case of a CD launch, a stellar supporting cast. Expect Jim Byrnes, The Sojourners, & plenty of others to join him on stage.