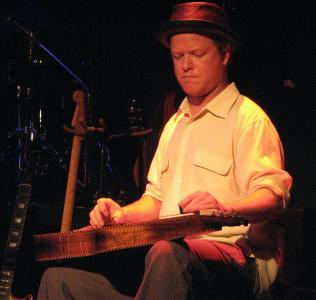 ...one of the most innovative resonator guitar stylists in North America... – Toronto Star
...one of a handful of steel-string players who can create magic... – Vancouver Province
...steel springs for fingers and a quicksilver brain... – MWE3.com

Vancouver guitarist and acclaimed record producer Steve Dawson produced two albums winning Junos this year: Jim Byrnes' Everywhere West and Old Man Luedecke's My Hands Are On Fire. Last year he organized and led the incredible Mississippi Sheiks' Tribute Project that led to a wonderful CD, a couple of memorable concerts at CPAT during the Olympics, and a spate of appearances by various members of the tribute crew at major festivals across the country. There have been countless other production and performing creidts in the past couple of years as Steve's career has really taken off. In 2009 he released two solo CDs. Before that he was half of the astounding acoustic duo Zubot & Dawson.

A Steve Dawson concert is always a special event, and the new CD guarantees that this one will be right up there with the best of 2011. A fitting way to celebrate the Rogue's birthday!