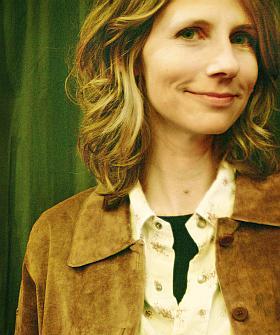 Tracy Grammer rose to acclaim as half of the "postmodern, mythic acoustic" duo, Dave Carter & Tracy Grammer. The duo released three internationally renowned albums featuring Carter's award-winning Americana songcraft and toured with Joan Baez, both as featured artists and band members. Sadly, in 2002, Carter died suddenly of a heart attack while touring with Grammer. He was 49.

Grammer, determined to honor Carter's memory and the journey the duo had begun, kept to the road and continued singing. In 2004, she released The Verdant Mile, an independently-produced, seven-song EP of cover songs, plus one original tune and one instrumental. The EP features Grammer with multi-instrumentalist Jim Henry in an acoustic, stripped-down setting. VM was the most played album on folk radio in December 2004 and garnered Grammer heaping praise from reviewers and fans who were waiting to see what she would do next.

In April 2005, she released Flower of Avalon, the much-anticipated full-length solo debut from Tracy Grammer. Multi-tasking masterfully as co-producer (with John Jennings), singer, and multi-instrumentalist, Grammer dug deep into Dave Carter's back-catalog to carry forward the very best of his unrecorded material. Mary Chapin Carpenter sings harmony on three cuts and wrote the liner notes for the record. Carpenter writes, "Tracys continuing quest to make sure that the world remembers Dave Carter marks a new beginning of artistry for her. We are lucky that she is so brave, generous and gifted." In January 2006, FOA showed up on "Best of" lists around the country, and was the ..1 most-played album on folk radio for 2005 — a testament to Grammer's strength as a solo artist, and to the enduring appeal of Carter's songwriting.

In 2006 Tracy released Seven Is The Number, the last full-length Dave & Tracy recording. Begun in their home in the winter of 2001/2002, this album was unfinished at the time of Carter's death. It features songs from Carter's out-of print solo release, plus two new songs heard here for the first time. Grammer and engineer Mark Frethem completed the project in time to honour the fourth anniversary of Carter's passing, releasing the album at the Falcon Ridge Folk Festival in July 2006. A further EP, Book Of Sparrows, followed late last year, together with a stunning CD of seasonal songs, American Noel, with three Carter originals and several traditional songs. Tracy will perform solo this evening, accompanying herself on fiddle, mandolin and guitar.

Wit, wisdom, womanhood, harmonies, hilarity & hips weave the musical tapestry known as August. Four award-winning independent recording artists/songwriters - Rae Armour, Beverley Elliott, Linda Kidder, and Meg Tennant - may not be spring chickens, but things are still cookin' in the hen house! They are equally at home on stage or on the back porch, combining their unique blend of folk, country, bluegrass and pop. Their intimate presentation is uplifting, humorous, heart-warming and insightful - makes you laugh, makes you cry. When August comes around, it's time to kick back and enjoy the music!

"I really believe given half a chance, August could be one of our premier Canadian music acts." - John P. McLaughlin, The Province